Britain's Got Talent bosses are reportedly considering David Walliams’ position as a judge on the show.

Leaked transcripts obtained by the Guardian this week revealed derogatory remarks made by Walliams towards contestants on the show.

END_OF_DOCUMENT_TOKEN_TO_BE_REPLACED

The television personality and children's author, who is a judge on the ITV talent show, was recorded referring to one contestant as a “c**t” and saying of another: “She thinks you want to f**k her, but you don’t.”

The offensive remarks were made during a recorded audition show at the London Palladium in January 2020.

It has now been reported that Walliams could be axed from Britain's Got Talent following the controversy.

One source told the Mail: “This could not have come at a worse time in terms of his return to BGT, the discussions are going on right now so David’s remarks have now become a huge part of the conversation. 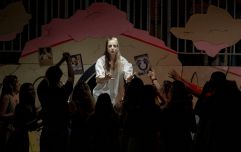 END_OF_DOCUMENT_TOKEN_TO_BE_REPLACED

“He hasn’t signed any deal yet which has come as a relief because now there are options. It is a family show and this isn’t just a negative thing to happen, it is offensive to people.

“It has left David in a very precarious position. There are some people involved in the show who point blank don’t want him back, there is a danger of this incident becoming part of the BGT narrative and nobody wants that.”

The comedian and his fellow judges Simon Cowell, Amanda Holden and Alesha Dixon are all yet to sign contracts for next year's show, with negotiations ongoing.

Walliams has been part of the judging panel since 2012 (ITV) 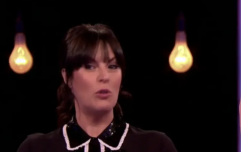 END_OF_DOCUMENT_TOKEN_TO_BE_REPLACED

The first incident of the offensive remarks was made about an older performer who engaged in some light hearted banter with the judges during which he made a jibe about Walliams.

Microphones used to capture discussion between the judges picked up Walliams calling the contestant a "c**t" three times.

The second incident occurred shortly after a female contestant auditioning on the same show had walked off stage. When her performance was over, Walliams remarked: “She’s like the slightly boring girl you meet in the pub that thinks you want to fuck them, but you don’t.”

Walliams reiterated: “She thinks you want to f**k her, but you don’t.”

Lawyers for Walliams and Thames TV, the production company behind Britain’s Got Talent, say the comments were part of a private conversation never intended for broadcast.

In a statement the former Little Britain star said: “I would like to apologise to the people I made disrespectful comments about during breaks in filming for Britain’s Got Talent in 2020.

“These were private conversations and - like most conversations with friends - were never intended to be shared. Nevertheless, I am sorry.”

A spokesman for ITV said: “We do not condone the language outlined in these allegations and we have spoken to the producers of Britain’s Got Talent.”

Walliams has been a popular feature on Britain's Got Talent since his introduction as a permanent judge on the show in 2012.

popular
Bride asks for divorce day after wedding following groom's disrespectful cake stunt
Natalie Imbruglia's Torn is actually a cover and the original just isn't the same
Head of dive squad searching for Nicola Bulley thinks 'something's not right'
Here's why Nicola Peltz-Beckham's family are suing her wedding planners
Gwen Stefani reportedly pregnant with baby number four
Tributes paid following tragic death of Emma Pattison and her family
Has the Call Her Daddy podcast just pulled the best marketing stunt of all time?
You may also like
2 weeks ago
Bruno Tonioli confirmed as David Walliams' Britain's Got Talent replacement
2 weeks ago
Love Island's Haris reportedly dumped from villa after street brawl video
2 weeks ago
Kylie Jenner wears huge lion's head attached to dress at fashion show
3 weeks ago
Selena Gomez hits back at trolls who body-shamed her after attending the Golden Globes
3 weeks ago
Is Nurse Lucille Robinson leaving Call The Midwife forever?
3 weeks ago
Twitter post fuels debate over what 45-year-olds looked like in the '90s
Next Page