Forgive us father, for we have sinned. It's been (made up time due to embarrassment) since our last confession.

These are our sins...

Yep, if it's confession in a hurry that you need well, you're in luck. Ahead of the Pope's visit this weekend, Paddy Power has created a giant drive-thru confession box for all you "saints" and sinners. 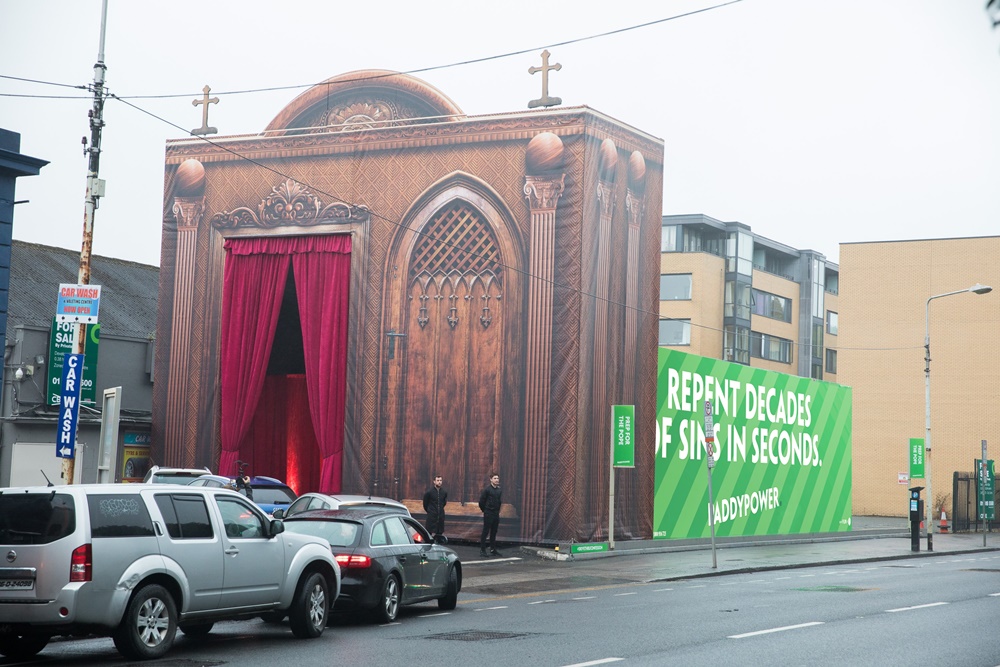 The confession box, which stands at over 1o metres high is now located in Dublin 8 near Phoenix Park, where up to 500,000 people are expected to attend the first Papal visit to Ireland since Pope John Paul II stopped by in 1979.

The confession box was built after a survey conducted by the bookmakers revealed that over 80 percent of people do not go to confession regularly with over 20 percent saying they actually cannot even remember the last time.

"Ireland has changed a lot since the last Pope's visit - gay marriage is legal, we’ve repealed the Eighth Amendment, and even secretly cheered for England in the World Cup.

“With decades worth of sins clocked up since then, we’re providing a convenient means to complete your contrition with your keys still in the ignition.”

“And if the Catholic hierarchy have anything they’d like to get off their chests too, they are more than welcome to take a spin through our mega drive-thru confession box while they’re here.”

Epic - and it appears the gigantic confession box is turning a LOT of heads today.

A Drive Thru Confession Box in Dublin! I love the Irish humour ? pic.twitter.com/PxZOtWp2be


popular
Zara's €20 top comes in eleven different colours and it's the cosy comfort we need
Golden retriever Sunny delivers groceries to his owner's neighbour and what a good boy
Rihanna has just been given a Government role in her home country of Barbados
#Covid-19: Life cannot go 'back to normal' after Easter Sunday, says Simon Harris
Meghan and Harry issue statement following Donald Trump's Twitter comments
Gwen Stefani reportedly pregnant with baby number four
'You've been great' It looks like Harry and Meghan just shared their final Instagram post
You may also like
3 months ago
8 things that happen in EVERY Irish household on Christmas Day
3 months ago
WATCH: We tried eggnog for the first time and have some very important thoughts
4 months ago
Remember the Toy Show's JohnJoe Brennan? He's going to be on RTÉ One tomorrow night
4 months ago
WATCH: Kim Kardashian just proved she's the chocolate connoisseur of our generation
4 months ago
Five things that happen EVERY single year at the office Christmas party
4 months ago
Prince Harry was called handsome in Japan and his response is beyond adorable
Next Page