The Great British Bake Off had its first ever Vegan Week this week - leaving one of the contestants in tears.

And after temperatures (and tensions) had been heating up all episode, it seemed like things were finally back on track as the clock on the show stopper ended.

For their final challenge of the week, the bakers were tasked with making a celebration cake - without any dairy.

The final six contestants stepped outside of the tent to get some fresh air, which is when they noticed Ruby's show stopper - a lemon, chocolate and coconut cake - was starting to lose its head.

Haven’t cried in years and all it took was my cake to fall over. It’s official - bake off you broke me 😭😭😭 that was a toughie to watch. Off to cry again, bye. #GBBO 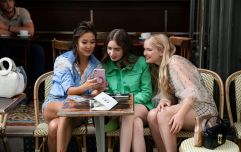 END_OF_DOCUMENT_TOKEN_TO_BE_REPLACED

The other bakers looked on in horror as the top layer of her cake fell, with presenter Noel Fielding delivered the news to Ruby - who burst into tears after hearing what had happened.

And viewers were equally as heartbroken for Ruby, who had been finding the challenges for the seventh week difficult.

It actually hurt to watch Ruby’s cake fall! I never thought I’d be watching a baking programme like this... @BritishBakeOff #gbbo #bakeoff pic.twitter.com/U7SndAS3fB

This is the worst episode ever. Why did Ruby's cake fall, I don't think I have the heart to watch this any longer 😭 @iam_rubes #GBBO

The way Noel jumper towards Ruby when the cake fell. Just like ‘fuck this is devastating and I can’t protect you but I want to.’ 💔 #GBBO

It wasn't all bad news, though.

Despite the collapse, Prue Leith and Paul Hollywood both loved the "delicious" cake - and Ruby was safe for another week.

And she wasn't the only one of the bakers that suffered a technical problem, with the top layer of Rahul's cake also falling during the last challenge.

Ultimately, though, both of them were safe - and Jon was the baker that was sent home.

popular
Mum accidentally names twins after TV show and now wants to change their names
Trolls target Emma Willis' eight-year-old son over pink clothes and long hair
WATCH: Zara shopper left mortified over embarrassing trouser gaffe
Dublin TikTok house deny staging dance with couple having sex behind them
Lily Allen launches "life-changing" sex toy and yeah, fair play
Here's what happens on every day of your menstrual cycle (roughly)
Someone has ranked the penis size of men from all over the world
You may also like
1 week ago
QUIZ: Can you guess the TV show from its opening scene?
1 month ago
5 Netflix releases to keep an eye out for in October
1 month ago
The Pursuit Of Love is period drama that will be your next TV obsession
1 month ago
4 new additions to Netflix to spend your weekend watching
1 month ago
Oy with the poodles already! Alex and Ani have released a Gilmore Girls collection
1 month ago
Here’s who’s on the Late Late Show tonight
Next Page