Hazza is raking it in.

Not that we still believed One Direction would ever reunite *sigh* but now there's definitely not a chance of Harry returning to the band after it was reported that he's making six times more than any of his fellow bandmates by killing it in his solo career.

New reports from The Sun state that Harry is now making a staggering £33 million (€38.7 million).

In the 12 months leading up to March 2019, it is reported that Harry took in £17.9 million (€20.9 million) from his company Erskine Touring - handling all his concerts.

Then, his tracks are said to have brought in £15 million (€17.6 million) and that revenue is handled by his other company Erskine Records. 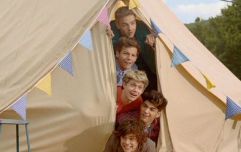 END_OF_DOCUMENT_TOKEN_TO_BE_REPLACED

And now, as Harry is releasing his second solo album and ready to head on tour yet again, we believe the 2019/2020 earnings will be chart-topping similar to his music.

Aside from Harry, the next 1D member with the most cash to flash is Zayn Malik who has reportedly got £5.8 million (€6.8 million) to his name. After that comes Niall Horan, Louis Tomlinson and Liam Payne who is at the bottom of the list with under half a million.

And as the One Direction boys continue with separate ventures, it's no surprise that some of them have drifted apart. Speaking to The Face magazine, Liam spoke about his distance from Harry saying:

"There’s so much mystery around who he’s become. I was looking at some pictures of him the other day, and I just thought, I don’t know what more I’d say to him other than, 'Hello' and 'How are you?'"

You hate to hear it.

popular
Everything we know so far about Kourtney and Travis's Italian wedding
Wagatha Christie: Rebekah Vardy storms out of court just 30 minutes into final day
Claire Byrne Live viewers in shock as woman shares family DNA secret
Helen McCrory's children give heartbreaking tributes at her memorial service
Only a matter of time before monkeypox spreads to Ireland, says expert
Rebel Wilson claims male co-star sexually harrassed her
Late Late Viewers left in awe of Paul McGrath's memories of Jack Charlton
You may also like
1 month ago
Liam Payne finally explains weird accent during hilarious Oscars interview
2 months ago
Harry Styles' stalker charged after allegedly breaking into his home
4 months ago
Cheryl says her "world changed" when she became a mother
6 months ago
Harry Styles has launched his own unisex beauty brand
11 months ago
Liam Payne opens up about hitting "rock bottom" during One Direction days
1 year ago
RANKED: Top 10 One Direction songs of all time (controversial)
Next Page