Will you be tuning in on Friday night?

While Ireland looks set to remain in Level 5 of lockdown for the next couple of weeks at least, The Late Late Show is often the most exciting part of our Friday nights.

Here's who is on the show this week: 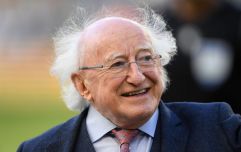 END_OF_DOCUMENT_TOKEN_TO_BE_REPLACED

In a historic week which saw Joe Biden sworn in as the 46th President of the United States, James Comey will be speaking to Ryan about the impact President Biden can make.

The former director of the FBI, will be speaking about what he thinks the future holds for the USA and for former President Donald Trump.

Comey was recently portrayed by Jeff Daniels in the series The Comey Rule, in which Brendan Gleeson played Donald Trump.

With the 40th anniversary of the Stardust Tragedy taking place next month on Valentine's Day, Ryan will speak to author Lisa Lawlor, who lost both of her parents in the fire that claimed 48 lives, leaving her orphaned at less than two years of age.

Ryan will also be joined by Jeni Pim, wife of Nigel Pim who passed away on 14 January from Covid-19 at the age of 50.

The Late Late Show kicks off on RTÉ One on Friday at 9.35pm.

Girls With Goals || Her · Ep.161: Feeling Peachy - Sharon Keegan of Peachylean on being an absolute BOSS!
popular
A documentary on the murder of Grace Millane is coming soon
Emilia Clarke is set to be the next Marvel superhero
The sad reason why viral gymnast, Katelyn Ohashi, isn't on the USA Olympic team
This is how you can protect your Instagram account from that Ray-Ban scam
I tried cupping therapy for my tight, work-from-home shoulders – and here is what happened
Jennifer Lopez just shared a steamy snap of herself and Ben Affleck – and WOW
Bride dislocates her leg during her first dance in viral clip
You may also like
1 month ago
The Late Late Show audience is returning - but only for vaccinated people
5 months ago
Dolly Parton is on the Late Late Show tonight
5 months ago
Lynsey Bennett will be on tonight's Late Late Show
8 months ago
Our first female President of Ireland is on The Late Late Show tonight
8 months ago
Here's the line up for tomorrow night's The Late Late Show
9 months ago
Here's the lineup for tonight's episode of The Late Late Show
Next Page