This is going to be amazing.

Tonight's I'm a Celeb is set to see "the most ridiculous" trial yet - at least, according to Holly Willoughby and Dec Donnelly.

The TV presenters couldn't believe what they were seeing in the sneak peek for Thursday night's episode of the beloved relative TV show.

The challenge, called Ding Dong Merrily Up High, involves Fleur and James - dressed as Santa and Rudolph, respectively - up in the trees and trying to get presents in Santa's sleigh. 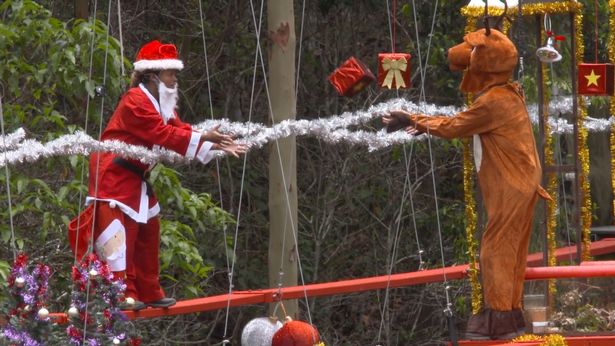 The only catch is that Fleur has to tell James where to throw the gifts, as he's blindfolded.

All in all, it looks challenging enough. Especially considering James is going to have to snag the presents from the creepy crawlies that are in there with him (because of course he wouldn't be trying to get them solo).

As the clip begins, Holly declares:

"This is ridiculous. This is the most ridiculous thing ever."

It goes on to show Fleur trying to guide James to the next gift - presumably one of the stars for a camp meal, although possibly another luxury item challenge.

Then Dec makes things worse for James, as he shouts up:

"There might be some green ants nest in there..."

The Vamps musician starts jumping around in shock, trying to dodge the critters (that, again, he can't see), which leads Holly to become very concerned, saying: "Oh those ants are going to get inside that suit."

Although her worry soon melts away, as she points out a small issue to Dec.

"I know we should be focusing on something else here, but Ruldoph usually has a red nose?"

popular
Selling Sunset's Chrishell Stause reveals "the brokerage has split"
Eight Of The Best Films And Documentaries On 9/11
Here's what happens on every day of your menstrual cycle (roughly)
So apparently Kourtney Kardashian is now dating 20-year-old, Luka Sabbat
4 new additions to Netflix to spend your weekend watching
Someone has ranked the penis size of men from all over the world
Why Are Men so Obsessed With Boobs? The Answer is Pretty Surprising...
You may also like
1 month ago
I'm A Celebrity, Get Me Out Of Here moves to ruined castle in UK this year
8 months ago
Charlotte Crosby says she was lucky if ex-boyfriend Joshua kissed her once a day
9 months ago
Myles Stephenson on what really happened during that off-air chat with Jacqueline Jossa
9 months ago
Jacqueline Jossa says that reuniting with her family was better than winning I'm A Celeb
9 months ago
Andy Whyment says he wants to go back to his 'normal, boring life' after I'm A Celeb fame
9 months ago
Dan Osborne has shared some gorgeous holiday pictures of Jacqueline Jossa and their kids
Next Page