Well, this doesn't sound too safe.

We spend a lot of our time on Whatsapp. Whether we're messaging our BFFs, our mums or our work colleagues it's safe to say that it's one of our main forms of communications these days.

However, the latest update seems to be a bit of a dodgy one.

END_OF_DOCUMENT_TOKEN_TO_BE_REPLACED

Up until now the app would protect every message using end-to-end encryption, which means that every message is secure, and can only be read by the people sending and receiving it.

That has now changed since Whatsapp has added free backups, provided by Google, that break that encryption.

Everything is still kept private on your phone – but the backups are not encrypted, which means that potentially anybody can see what texts and images you are sending and receiving.

It's only Android users that are affected however, as they have Google Play services installed on their phones and are signed up with a Google address. 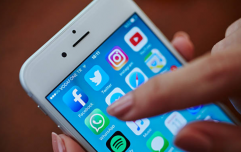 END_OF_DOCUMENT_TOKEN_TO_BE_REPLACED

The company's help page makes it very clear that messages are not protected, saying: "Important: Media and messages you back up aren't protected by WhatsApp end-to-end encryption while in Google Drive."

You can delete backups by going onto Google Drive and going into the 'manage apps' setting.

popular
Ekin-Su Cülcüloğlu signs the biggest fashion deal in Love Island history
Love Island's Amber opens up on unaired fight between Remi and Jacques
Baby twins die in hot car after dad forgets to drop them to creche
Tasha Ghouri lands major brand deal post Love Island
Love Island producers respond to claims Jacques was kicked off the show for "bullying"
Love Island's Danica said she felt "disrespected" in the villa
Jacques O'Neill issues apology after facing backlash for online behaviour
You may also like
2 days ago
WhatsApp introduces way to choose who can and can't see you're online
8 months ago
WhatsApp launches privacy update today after Irish ruling
9 months ago
WhatsApp to stop working on over 50 phone models today
10 months ago
Bride asks guests to pay per slice of cake eaten at wedding
10 months ago
Facebook, Instagram and WhatsApp down as outage hits for hours
2 years ago
WhatsApp to stop working on millions of phones as of today
Next Page