Lewis Capaldi sent the audio guys at the Brit awards into meltdown last night as he presented an award to Dua Lipa and descended into chaotic swearing on live TV. The 24-year-old singer, who is known for his chart-topping anthems, greeted the audience with a to-the-point, "Hello motherf***ers!". He was then hastily muted by ITV before it was lifted and another swearword slipped out as he said: "I'm f***ing s-"

Once again, he was muted continuously before pausing and said: "Sorry, I was reading off a card here - 'how is everyone doing?' 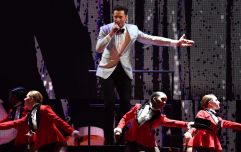 END_OF_DOCUMENT_TOKEN_TO_BE_REPLACED

To be honest, it was quite difficult to understand anything else he said through the muting, and fans were quick to flock to Twitter to discuss. One fan was absolutely delighted with the turn of events saying, "Lewis Capaldi saying 'hello mother****ers' live at the brits will forever be burned into my brain I love him sm."

One fan was quick to outline the singer's iconic status:

he's an icon. he's a legend. lewis capaldi everyone. pic.twitter.com/xcxPGvkQDS

Love him or hate him, you have to admit Lewis has a way with words, even if we'll never get to hear them.

Girls With Goals || Her · Ep.161: Feeling Peachy - Sharon Keegan of Peachylean on being an absolute BOSS!
popular
Britney Spears' dad Jamie says he is "sorry" to see daughter in pain
Harry and Meghan reject Archie's royal title because it has 'dumb' in it
Nearly half of men think 36 is "too old" for women to have a baby in UK
Woman escorted from Disney World for "inappropriate" top
Friends fans spot massive body double blunder in episode rewatch
Drake Bell pleads guilty to attempted child endangerment after arrest
Aldi's new garden collection includes massive waterpark, slides and 14ft pools
You may also like
2 years ago
Emily Atack tells body shamers to 'have a wonderful evening, and then go f*ck yourself'
2 years ago
Dua Lipa looked like a glorious goddess at the Brits because of course she did
3 years ago
Este Haim called Cheryl to apologise for last night's antics and it was GAS
3 years ago
Everyone was talking about Dua Lipa's dress at the Brits last night
3 years ago
Phil Schofield Snapchatted the entire BRITs while hammered and it was legendary
3 years ago
Love Island's Amber Davies debuts dramatic new look and we love it
Next Page