Viewers took to Twitter to point out that the images had been edited.

Lorraine Kelly's daytime TV show has received a number of complaints after showing an edited before and after snap of the Himalayan mountain range in South and East Asia.

During a segment from April 22, Lorraine interviewed Mike Gunton who worked on the David Attenborough documentary, The Year The Earth Changed, which examines the impact of the Covid-19 pandemic on the natural world. 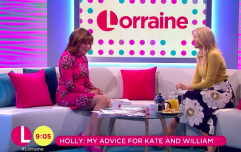 END_OF_DOCUMENT_TOKEN_TO_BE_REPLACED

The programme then displayed a side-by-side image of two shots of the Himalayas overlooking a city. In one image, smog surrounds the mountains, while the other picture shows that the smog has cleared.

"We're seeing the Himalayas before and after," Lorraine says. "You can see the split-screen there. That was before when it was just smog basically, and then look at that. Crystal-clear views. Remarkable isn't it?" 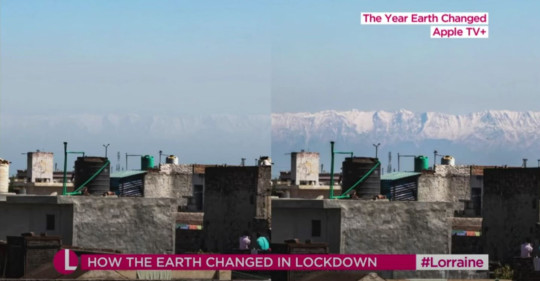 However, eagle-eyed viewers of the show took to social media to highlight the fact that the images were edited.

The original documentary clarified that the images, which were taken by photographer Anshul Chopra, were edited as a part of an animation to show the effects of pollution.

However, this was not evident during the Lorraine segment.

Hello, I am Anshul Chopra. I'm a photographer. I am so overwhelmed to see my image going viral all over the country. Just wanted to come up & tell my country the photographer behind this shot 😇@timesofindia @indiatimes @httweets pic.twitter.com/riyybmKEah 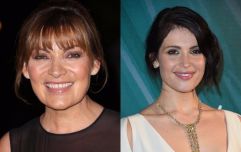 END_OF_DOCUMENT_TOKEN_TO_BE_REPLACED

A spokesperson for Ofcom told Metro that they received over 100 complaints after the segment.

ITV commented on the programme saying:

"The images that were used are taken directly from the David Attenborough documentary The Year the Earth Changed.

"The before and after was screen grabbed to show the difference, as it is shown via animation in the documentary."

Girls With Goals || Her · Ep.161: Feeling Peachy - Sharon Keegan of Peachylean on being an absolute BOSS!
popular
The DIY frozen coffee recipe that's so delicious you'll never pay for an iced latte again
Khloe Kardashian has JUST confirmed she is pregnant
Here's what happens on every day of your menstrual cycle (roughly)
How to INSTANTLY unblock your stuffy nose (we swear this works)
Someone has ranked the penis size of men from all over the world
Summer fashion: I got my entire staycation wardrobe sorted with these 7 buys
'They're Dead To Me Now' - Kate And Oliver Hudson Have Been Disowned By Their Father
You may also like
2 years ago
Dido was on telly today and people are shook over how ageless she looks
3 years ago
Lorraine Kelly has some extremely harsh words for Meghan Markle
4 years ago
Viewers had a right giggle at Lorraine Kelly's Next dress today
5 years ago
WATCH: Lorraine Suffered An Unfortunate Slip Up With Piers Morgan Live On Air
5 years ago
TV Presenter Lorraine Kelly Slammed Over 'Bullying' Interview With Geordie Shore Star
6 days ago
Enchanted sequel: New pictures from the Enniskerry set as filming gets underway
Next Page