The Love Island 'meet the parents' episode is happening tonight, and it's going to be emotional

So as we all know, the winter season of Love Island is coming to an end this weekend.

Sunday night, to be exact, a new couple will be crowned the winners (all going to plan).

And in the lead up for the grande finale, tonight will be the 'meet the parents' episode.

Which is always an emotional one.

The emotional episode comes after all the final couples were sent on their extravagant final dates this week.

Siânnise is the first to receive a text, which she opens to find a selfie of her sisters with Luke T’s parents.

Moments later they arrive in the Villa. Cute.

As they have an emotional reunion, Luke T’s dad tells his son: “I’m so proud of you – so are all the family at home, including the grandparents. Your grandad is watching Love Island!”

Luke T’s mum adds: “People keep coming to me and saying, ‘You should be so proud of him.’ You’re a beautiful kid, you probably don’t even know it. We are a very proud family.”

Siânnise’s sisters tell her: “Everyone is so proud of you.” 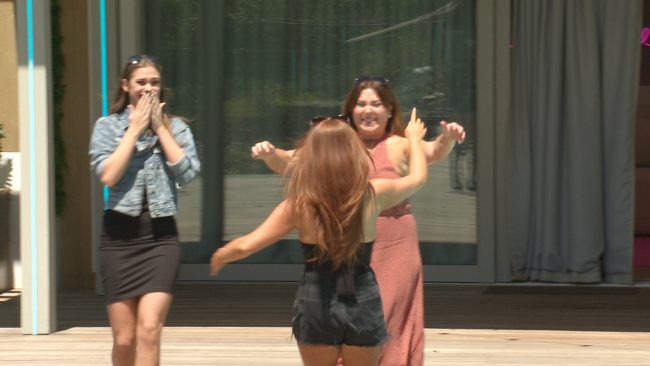 In the Beach Hut Siânnise admits: “Meeting Luke T’s parents. Honestly they are amazing. I just love them!”

Luke T adds: “That was just absolutely surreal. To see my parents… I can’t even speak. I can’t even describe the feeling.”

Next to arrive are Demi and Luke M’s family and friends.

Luke M tells his parents: “I’ve been missing you since day one!”

Luke M’s mum says: “I think the worst day [without you] was on my birthday. I’m trying not to cry. I’m so proud of you – you have been yourself.”

Luke M jokes: “I could hear my mum’s heels from miles away and my dad. Seeing them walk in was a feeling I’ve never experienced, ever.”

Demi’s mum says: “You’ve been amazing and you’ve made me the proudest mum ever.”

Demi says in the Beach Hut: “This is like the best day of my life. I am on Cloud 9. I can’t even express how I feel right now.” 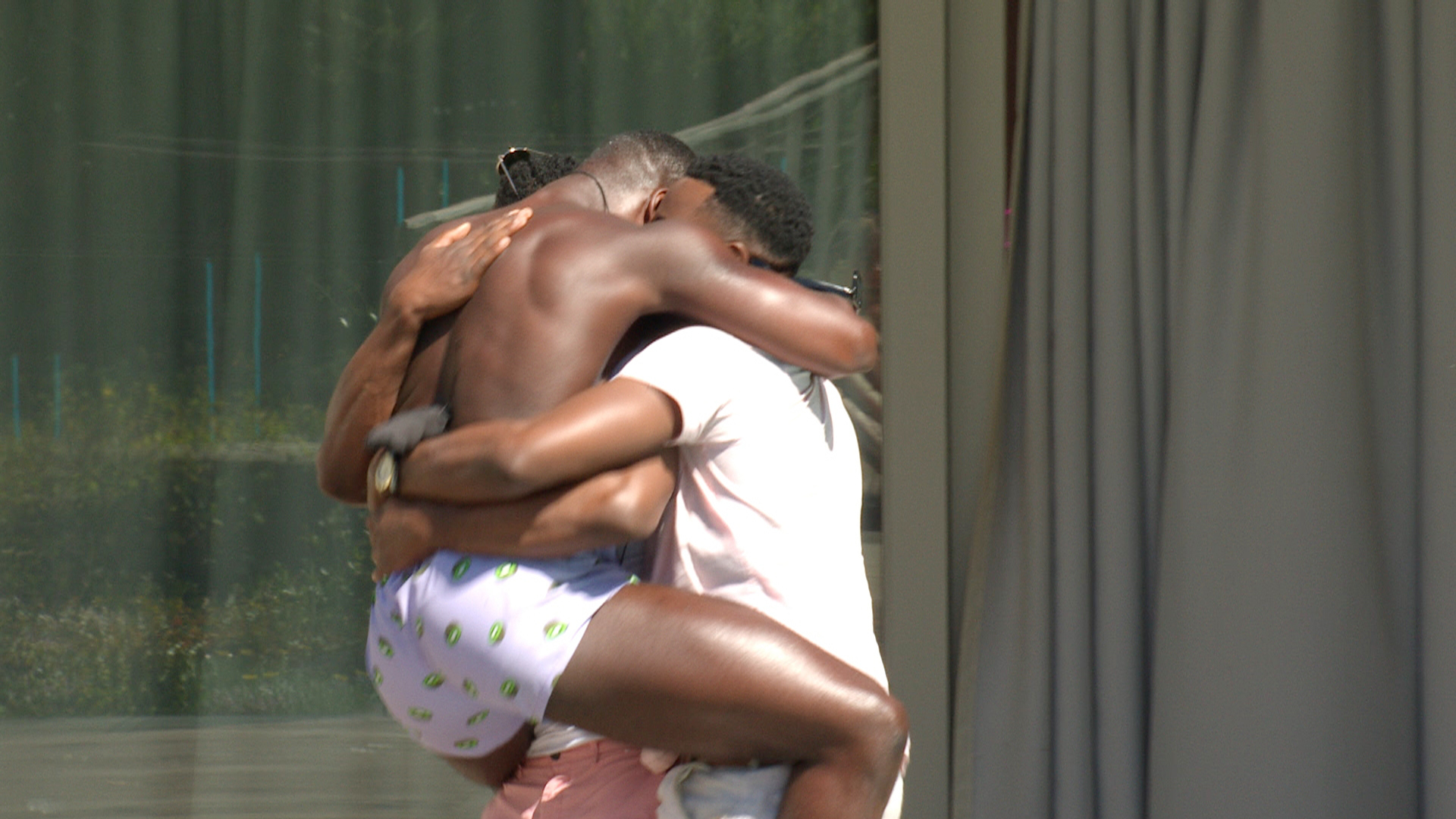 The next surprise for the Islanders is the arrival of Mike’s brothers and Priscilla’s mum and brother.

As Priscilla admits she didn’t think she’d find someone, Priscilla’s mum says: “That’s why they call it Love Island – you’re supposed to be here, get to know the person and learn about each other.”

Mike’s brothers tell him how their mum is feeling: “She is extremely proud of you.”

On reuniting with his brothers Mike says: “Wow, to be honest, I’m lost for words. I don’t even know what to say anymore. That topped it off. I’m just so happy that mum is proud of me and she’s watching and I’m making her happy.”

And Priscilla’s mum lets Mike know that there are certain rules to follow when it comes to her daughter, with him insisting he’ll do “whatever it takes”.

In true Paige style, her dad enters the Villa and jokingly calls to Finn: “Oi big boy – you got a minute?” 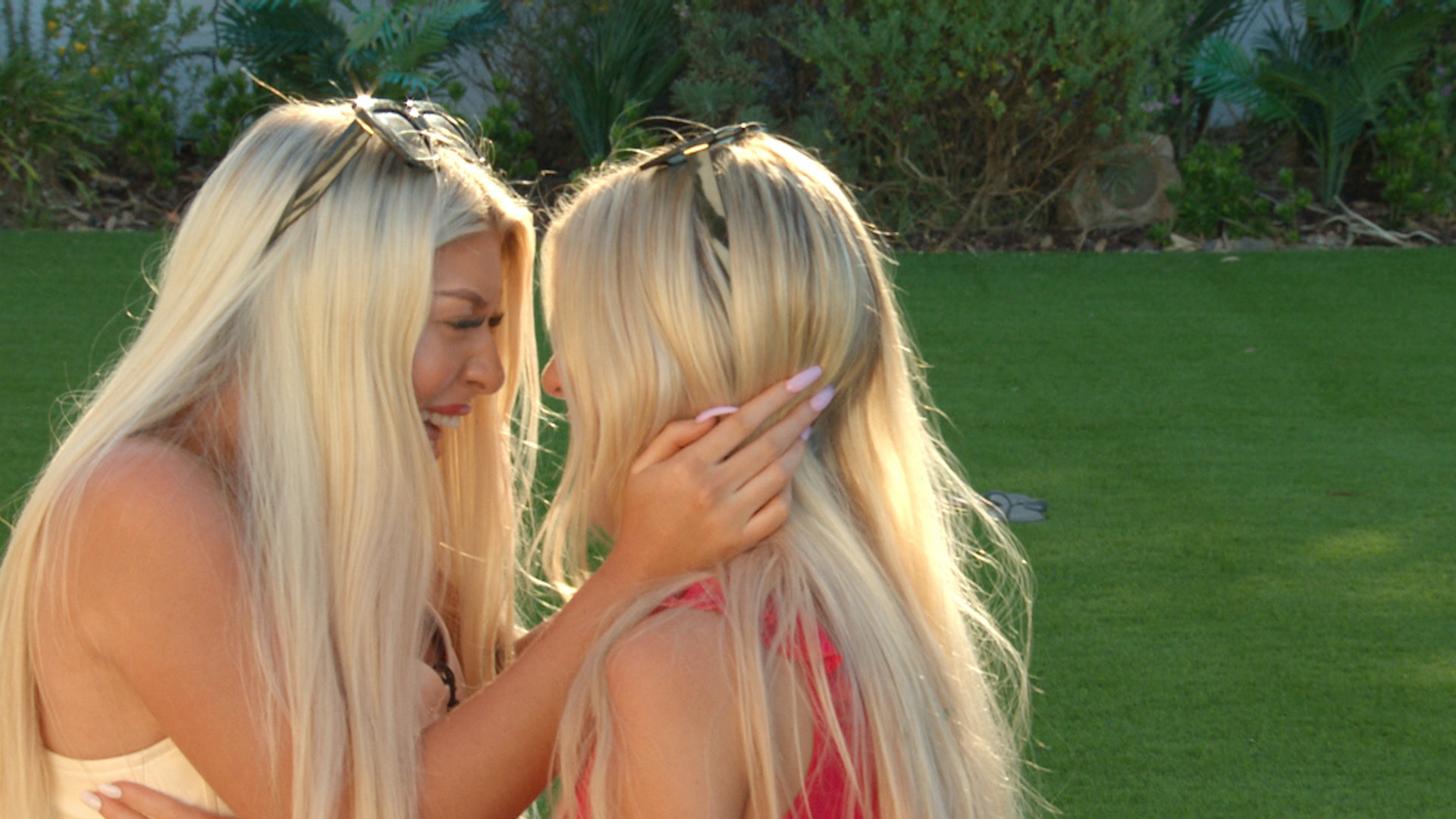 And Finn’s own dad jokes to him: “I’ve learnt so much about you in five weeks – more than I have in 20 years. Certainly the old foot fetish was a big one…”

He goes on to joke: “We’ve seen the old breakfast club chat…”

Finn laughs: “Don’t talk about that!”

Paige’s mum laughs to her: “You just always hear, ‘Finn!’ I can really tell you’re invested. It’s nice to watch.”

Paige’s dad adds: “The ‘Ice Queen’ has melted – a big puddle. It’s a different level – I’ve never seen that before. You look happy.”

Paige later admits in the Beach Hut: “I was more worried what Finn’s parents would say! You want to make a good first impression with the in-laws.” 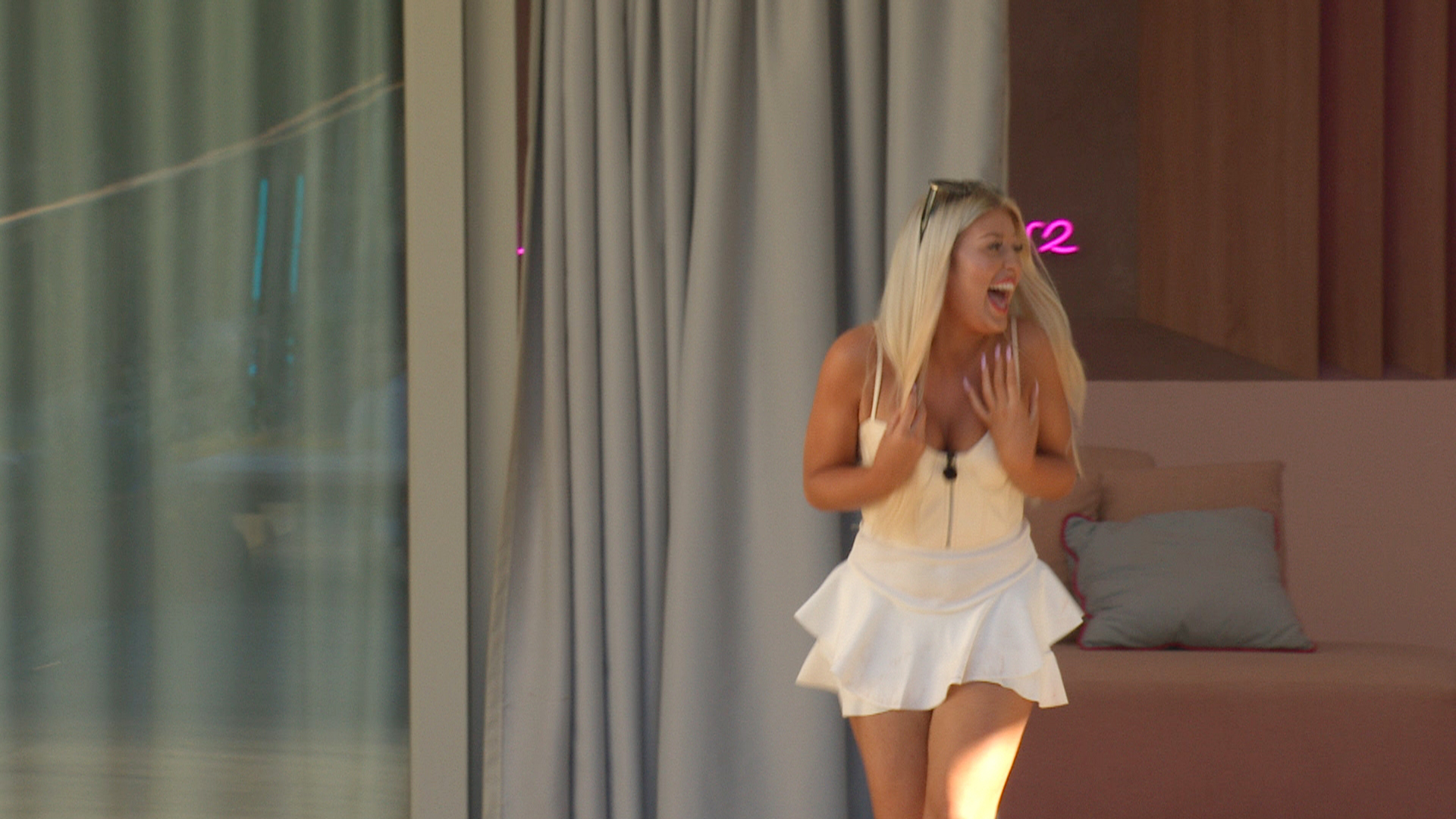 Jess says to her dad: “I can’t believe you’re here in Cape Town. I said surely not my dad, he hates flying! He can’t even go to Cornwall without causing a stir.”

Jess’s mum tells her: “You look at ease.”

But her parent’s arrival isn’t the only excitement for Jess… because her twin sister Eve is back, too! 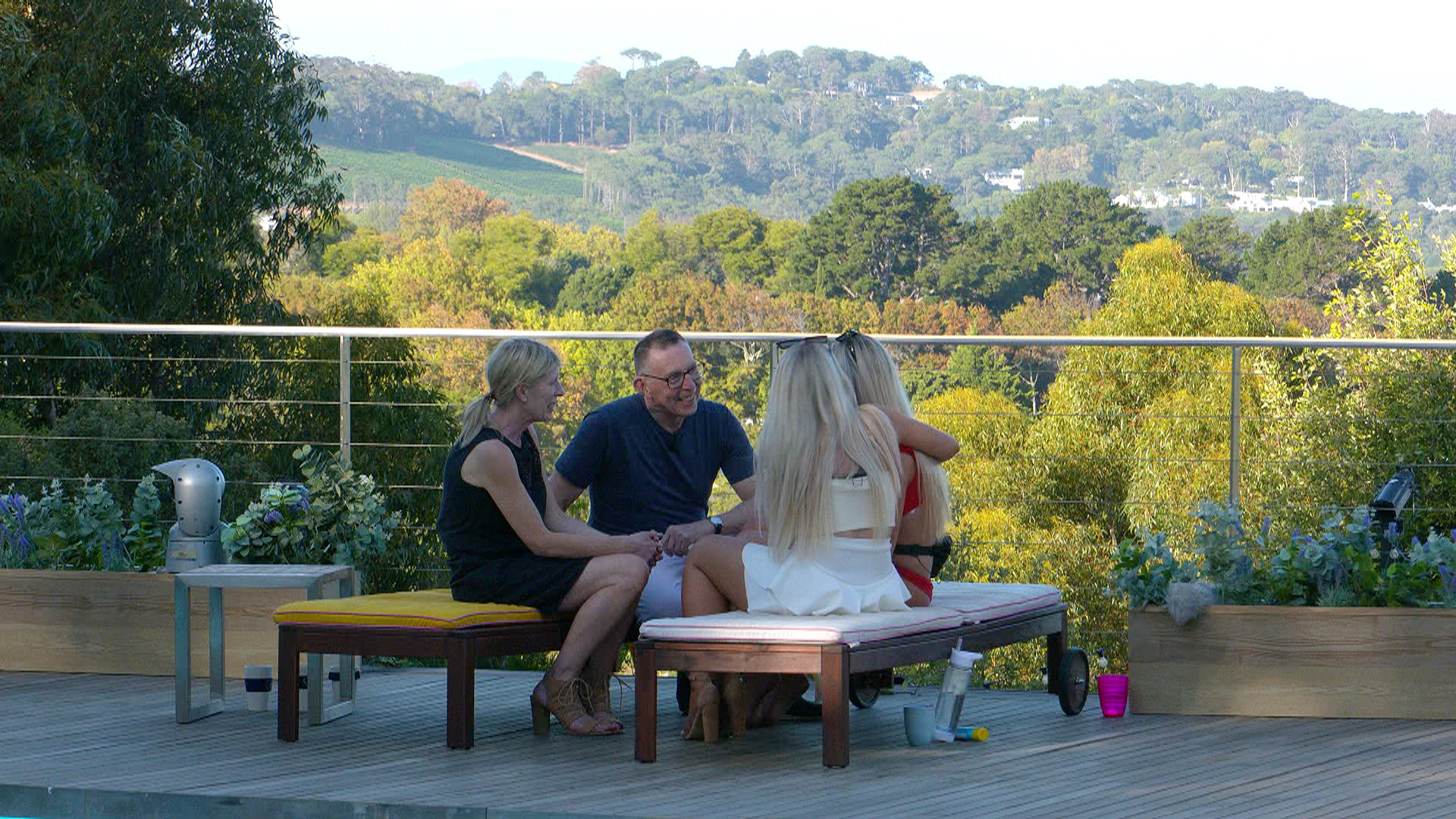 As Jess chats with her parents, what she doesn’t realise is her twin - and ex-Islander - Eve, is about to make a surprise entrance.

And as Eve walks through the door, the sisters have a heart-warming and emotional reunion.

A stunned Jess admits: “When Eve came through - I couldn’t believe it! It’s the best feeling! Every time something good happens, I wish Eve was in here to enjoy it with me. It was crazy having her back right beside me in this villa - it’s all I’ve wanted.”

So will Eve give Ched her all important approval? And what will the rest of the friends and family have to say about the Islanders’ significant others in the Villa…?


popular
You only need five ingredients for this delicious Maltesers and Baileys fudge
Woman demands her twin sister change her adopted daughter's name as she wants to use it
The eye cream that produced results in 24 hours (I'm now a complete convert)
Patient in Covid-19 ward spat towards nurses on "four to six occasions"
Meghan Markle's favourite mascara is one of the all-time beauty greats
Unpacking Kate and Will's Zoom call - so you don't have to
#Covid-19: Pharmacist shares how to tell the difference between hay fever and coronavirus symptoms
You may also like
1 week ago
#Covid-19: Love Island's Anna Vakili back to work as a pharmacist amid coronavirus outbreak
1 week ago
Love Island's Maura Higgins opens up about the reason behind her split from Curtis Pritchard
1 week ago
Love Island's Curtis responds to rumours he has moved on after split from Maura
2 weeks ago
Love Island may not be returning this June due to coronavirus
3 weeks ago
Love Island's Connor and Sophie's relationship 'on the rocks'
3 weeks ago
Love Island's Zara McDermott to making a revenge porn documentary for the BBC
Next Page