"We as his family don’t condone his behaviour last night, but we do understand he is in an intense environment where his emotions are heightened."

The family of Luca Bish have issued an apology "on his behalf" following his behaviour on last night's episode of Love Island.

During the episode, we saw Luca become upset and angry at Gemma after seeing footage of Billy flirting with her, even though she made it clear that she didn't flirt back.

END_OF_DOCUMENT_TOKEN_TO_BE_REPLACED

After watching the clip, he said: "I don’t even want to talk to her tonight. Made me look like an absolute fucking wanker. I ain't going fucking near that bird."

He later added: "Bring a fucking bird in now and watch me flirt. If she wants to play it down to me I will fucking explode."

On his official Instagram page, the family wrote: "I want to apologise on behalf of Luca for his insensitive reaction on last night’s episode. I know that when he watches it back, he will be embarrassed and deeply apologetic. 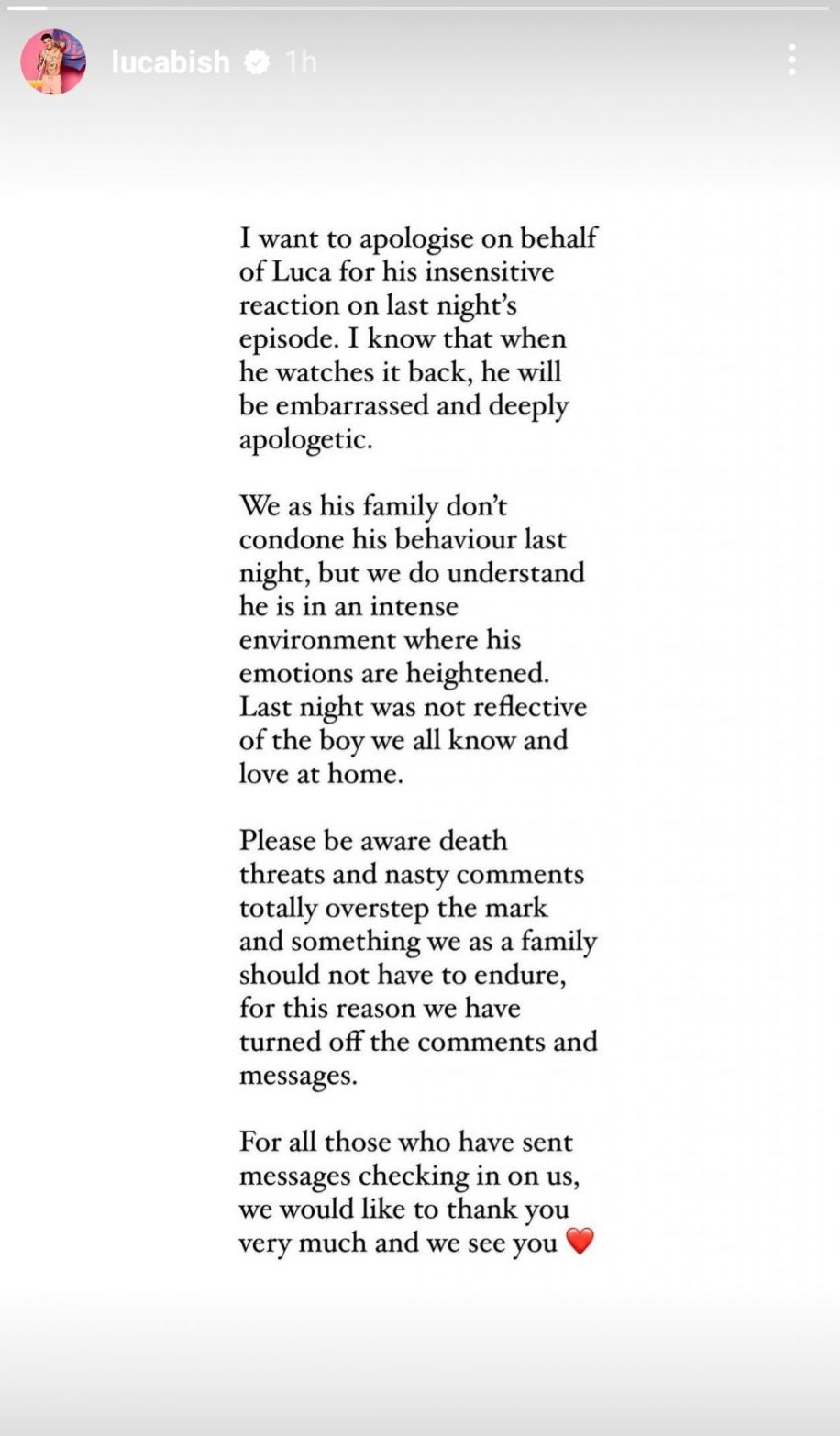 END_OF_DOCUMENT_TOKEN_TO_BE_REPLACED

"We as his family don’t condone his behaviour last night, but we do understand he is in an intense environment where his emotions are heightened. Last night was not reflective of the boy we all love at home."

They went on to explain that they have turned off comments on Luca's Instagram posts as a result of negative comments.

The message read: "Please be aware death threats and nasty comments totally overstep the mark and something we as a family should not have to endure, for this reason we have turned off the comments and messages.

"For all those who have sent messages checking in on us, we would like to thank you very much and we see you."

popular
Vogue Williams slams man who refused to swap seats with her on plane
New Zealand family find two bodies in second hand suitcases
Crown Paints advert receives 200 complaints over 'misogyny' and 'everyday sexism'
Are we getting a mini heatwave in September?
Scarlett Moffatt slams 'disgusting' pap for sneaking into hotel to take photos of her
Adam Collard allegedly attacked on night out with Paige Thorne
This is why the world is obsessing over Adidas Gazelles
You may also like
2 hours ago
Tasha Ghouri shuts down "ableist" comments of how she acts as a deaf woman
8 hours ago
Adam Collard allegedly attacked on night out with Paige Thorne
2 days ago
TikToker calls Indiyah his "wife" in front of Dami in viral video
2 days ago
Greg O'Shea actually left Love Island to go to his granny's funeral
2 days ago
Medics were called into Love Island villa after Ekin-Su had a panic attack
3 days ago
Coco Lodge has released her Love Island audition tape
Next Page