Have you tuned into RedHanded yet?

From watching documentaries like The Yorkshire Ripper and reading books like The Five, it's clear that when no female voices are involved in investigating crimes on women, the female victims lose their voice completely.

While true crime related content has exploded over the last couple of years, there is still a lack of women among the most known crime podcasts and YouTube series.

Recently I spoke to Hannah and Suruthi of RedHanded podcast to discuss female voices in true crime, their coverage of the Tuam scandal and my family's near brush with two of the UK's most infamous serial killers.

Since Hannah and Suruthi started RedHanded almost four years ago, it has gone from strength to strength, including live tours, magazine features and a massive following of over 57,000 on Instagram alone.

So why exactly did Hannah and Suruthi decide to start their popular true crime podcast;

"We just started with a £10 mic in the cupboard under the stairs.

When we met four years ago at a party we realised we both loved true crime podcasts and we decided to start RedHanded because we felt like we had a different perspective to offer.

A lot of true crime narratives across all platforms are presented by men so we felt from the off we had an important female perspective to bring to the table."

Suruthi says it's important to have female perspectives on true crime to respect and protect the victims;

"Unfortunately, statistically, with a lot of violent crimes and murders the victims are usually women.

Historically, or maybe traditionally is a better word, these stories have been covered by men and too often there is this insidious victim blaming or denigrating women in some way or another.

Hannah and I made a conscious choice that that wasn't how we were going to talk about victims on RedHanded." 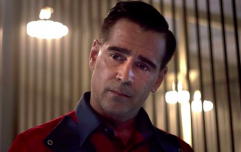 Colin Farrell reveals the sweetest advantage of starring in DUMBO and awww!

END_OF_DOCUMENT_TOKEN_TO_BE_REPLACED

As RedHanded is a UK based podcast, one of the episodes that stood out to me was the show's coverage of the Tuam Mother and Baby Homes scandal.

As a lot of Irish crime related stories are not often spoken about outside of Ireland, I was interested to know why RedHanded decided to cover it.

"I had known about Tuam for awhile but it wasn't until I looked into it properly that I realised that it was this huge scandal.

Catherine Corless is my absolute hero, what an icon.

Once we dug into it I knew we had to cover it on RedHanded, and it's one of the episodes that I'm most proud of because it's a really important cause.

In general we don't need to stay UK or US focused when it comes to stories, there's enough of that. There's so many more stories to tell from other countries."

One case that the RedHanded ladies felt was particularly tough to cover was the Fred and Rose West murders.

They where even more surprised when I revealed that my grandfather almost lived with the now infamous serial killers.

"He had gone to London for work as a young man, and when he was over there he was looking at different listings for lodgings," I said.

He was writing to my grandmother back in Ireland at the time and updating her on his progress and in one of the letters he said he went to a family home to ask about a room they had.

He wrote to my grandmother that while the couple were very polite to him he felt there was something off about the husband of the house.

Years later back in Ireland, my grandfather picked up a newspaper with photos of the Wests on the front page.

According to my grandmother he went white in the face and told her that they were the family he almost moved in with in London."

"Do you know what my favourite thing about working in true crime is," said Hannah, "that people will give us their true crime connections."

"In the time before Covid we'd have people come up to us and tell us stuff like 'I'm related to Mary Bell'.

"I love it, people just want to share their stories with us."

You can catch up with Hannah and Suruthi on the RedHanded podcast here.

popular
Late Late Show viewers are not happy with Ryan's questions for Billy Connolly
WATCH: Parents see person walk past daughter's crib in creepy baby monitor footage
10 items from Zara for the perfect autumn capsule wardrobe
Paris Hilton says she was "slapped" and "strangled" as a teen in youth care
Someone has ranked the penis size of men from all over the world
The First Quadrillionaire? Paypal Accidentally Gives Man $92 Quadrillion
Netflix Has Been Hacked – Here’s How To Check If Your Account Is Affected
You may also like
4 months ago
"I was holding out for more the entire time": Why do so many of us go back to our exes?
4 months ago
Journalist has sex live on radio during swingers club feature
5 months ago
Norah Patten: "There’s so much camaraderie in STEM courses between women"
6 months ago
"It changed my relationship with beauty": Journalist Mary Cate Smith discusses her alopecia journey
6 months ago
Anne-Marie Tomchak: "The pandemic has put the ecological crisis and climate change on people’s radar"
7 months ago
WATCH: Meghan says "a lot has been lost already" in new Oprah teaser clip
Next Page