Need something to watch tonight? These four Irish movies are all on Netflix

Have you seen all of these yet?

Normal People began on RTÉ and BBC last week and received rave reviews from most parts – some of the callers to Liveline being notable exceptions. Written by Sally Rooney, co-directed by Lenny Abrahamson and produced by Element Pictures, the series represents some of the best talent that Ireland has to offer.

If it's whetted your appetite for watching some quality Irish productions, head over to Netflix where there's a small homegrown offering buried among the big hitters from the US and UK. The more of us who watch them, the more Netflix will want to stream Irish productions – so it's a tiny but oh so easy way for each of us to support our film and television industry. At least that's what I'm telling myself while I spend the weekend on the couch! 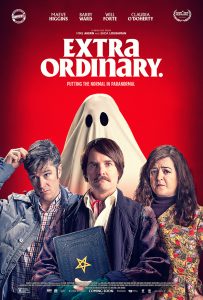 If you haven't already watched along at one of Alison Spittle's Covideo Parties, then Extra Ordinary is a good place to start. A really random but absolutely gas movie, it stars comedian Maeve Higgins as an investigator of paranormal activity turned driving instructor living in rural Ireland. When a local widower's daughter is bewitched by dark forces, our heroine is asked to confront a tragedy from her own past in order to help. To go into too much detail would ruin it, but among the many mad moments in this movie there's haunted wheelie bins, exploding virgins (yes really) and a baddie who looks an awful lot like a famous Irish singer. It's like nothing I've ever seen before – and I mean that as a compliment. 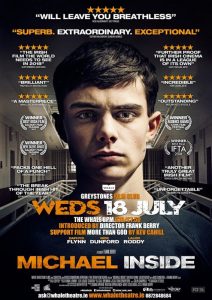 Eighteen-year-old Michael lives with his grandad in a Dublin estate and wants to work in social care when he finishes his Leaving Cert. When he's caught holding drugs for a friend, however, he is sentenced to three months in jail. The movie charts the grim realities of prison life, where drugs and violence are inescapable, as well as the lasting effects on the family left outside. Slow moving and gripping, Michael Inside has an excellent cast in Moe Dunford, Lalor Roddy and newcomer Dafhyd Flynn. It's a really tough watch by times – The Shawshank Redemption this ain't – but a rewarding one. 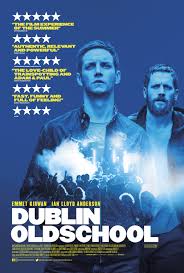 END_OF_DOCUMENT_TOKEN_TO_BE_REPLACED

Take a fractured family, a story about addiction and an ode to partying and tie them together with spoken word poetry and you have Dublin Oldschool – but don't let that description put you off. Based on his 2014 play of the same name, the movie is written by and stars Emmet Kirwan along with Love/Hate's Ian Lloyd Anderson. It's a tale of two estranged brothers who keep meeting over a trippy weekend in the capital. Although I personally think that it lost some of the magic in the translation from play to film, this film has a lot of die-hard fans. If you're really missing going out-out and mourning the loss of festival season, however, it may be best avoided. 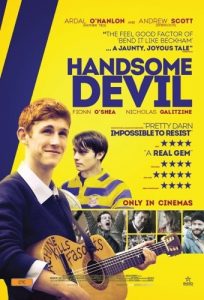 A coming of age story with a refreshing difference, Handsome Devil is set in a private school where rugby is the religion. That doesn't sit well with music lover Ned, who has more in common with his English teacher than his fellow students and is determined to lean into that. When he's allocated rugby star Conor as a roommate, the story should be set up for the pair to hate each other – but what happens is quite the opposite. This gentle movie is unlikely to rank in your best films of all time, but the two charasmatic leads, Fionn O'Shea and Nicholas Galitzine, and support from Andrew Scott and Moe Dunford (again) make it more than enough to put in a lockdown evening.

These titles have been knocking around Netflix for a little longer, so if you haven't seen them yet catch them before they are gone.

The Siege of Jadotville - Gripping drama based on a true story about a battalion of the Irish army who came under attack in the Congo in the 1960s.

popular
WATCH: Paul Mescal and Daisy Edgar Jones's first Normal People audition is stunning
The shows and movies you need to watch before they leave Netflix next month
Dublin TikTok house deny staging dance with couple having sex behind them
Here's what happens on every day of your menstrual cycle (roughly)
Emmerdale and Corrie actor Johnny Leeze dies following positive Covid test
6 cosy buys from Irish brands that'll make staying home a little easier
Here's the average age people lose their virginity around the world
You may also like
1 week ago
QUIZ: How well do you remember the movie The Incredibles?
1 week ago
The Witches is the latest film to skip cinema release and go straight to streaming
2 weeks ago
QUIZ: How well do you remember Hocus Pocus?
2 weeks ago
Whoopi Goldberg confirms 'Sister Act 3' is in the works and we're already singing!
3 weeks ago
QUIZ: Can you name these horror movies based off the opening scene?
1 month ago
WATCH: First look at The Trial of the Chicago 7, one of the most anticipated movies of 2020
Next Page