At first glance, a documentary about the royal family sounds like it would be some pretty relaxed and safe Netflix viewing.

END_OF_DOCUMENT_TOKEN_TO_BE_REPLACED

But one person ended up having to do a double-take after scrolling through the Documentaries section on the streaming service.

It was all because of how the show - The Royals - aligned with the show underneath it. And that fact that it turned the Duchess of Cambridge's outfit into an optical illusion.

The top half of the photo shows Kate and Prince William kissing on the balcony on their wedding day. But the bottom half of the image was spliced with a woman in stockings and lacy underwear. 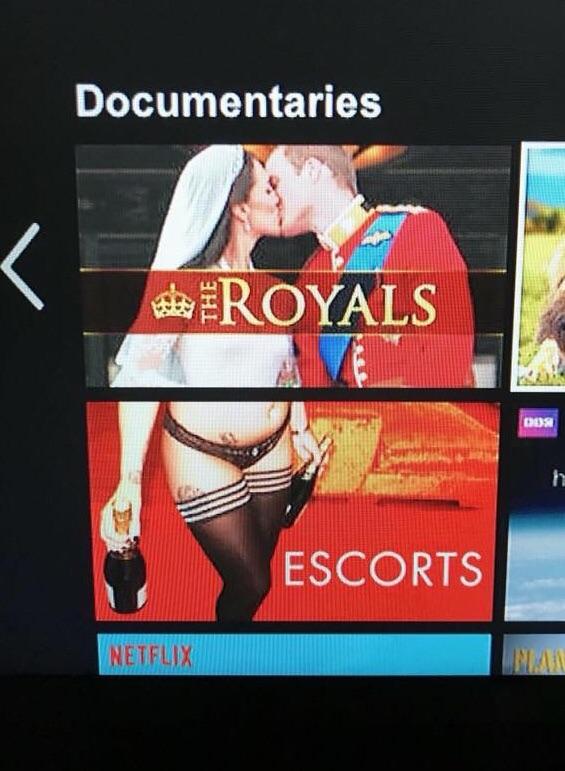 The photo was shared on Reddit, with the original poster calling it the "risqué side of Netflix" - and social media users couldn't help but giggle about the error.

It comes as a photoshop fail on Netflix left fans scratching their heads - as it was so subtle that many didn't even notice it at first.

END_OF_DOCUMENT_TOKEN_TO_BE_REPLACED

On a casual peruse through Netflix, Reddit user 'moofthestoof' came across this feature image for the newly released Netflix Original, The Babysitter.

Inspecting the regular areas for the obvious edits, it took us a few minutes before we had our lightbulb moment.

Still haven’t figured it out?

Well, it seems that not only is the babysitter in the picture a total serial killer, but also possesses two right hands.

popular
A documentary about two Irish boys who skipped school to go to New York is coming soon
People are only realising Kendall Jenner and Gigi Hadid are related and the reactions are gas
Ben Foden explains why he called Rachel Stevens "sexiest woman alive"
And Just Like That... episode 8: Nobody saw this one coming
Someone has ranked the penis size of men from all over the world
What's really happening with the online hate campaign against Meghan Markle?
Ben Foden's wife Jackie says it is "not possible" for him to cheat on her
You may also like
1 week ago
Season 2 of Cheer lands on Netflix tomorrow
1 week ago
Netflix's new thriller Mother/Android is leaving viewers in tears
1 week ago
What we can expect from Emily in Paris seasons 3 and 4
1 week ago
Selling Sunset's Chrishell addresses criticism over "annoying" personality on show
1 week ago
Everything we know about Ozark season 4
2 weeks ago
The Puppet Master: New Netflix docu-series could be your next true crime obsession
Next Page