Could one of our favourite characters be returning for the Princess Diaries reboot?

Last month we all heard that director of the original Princess Diaries movie Garry Marshall, and star Anne Hathaway were reuniting for a third outing of the Princess Diaries franchise, based on the successful book series by Meg Cabot.

Now we have even more information for you in terms of casting, and it's very exciting.

END_OF_DOCUMENT_TOKEN_TO_BE_REPLACED

Robert Schwartzman, aka Michael Moscovitz (Mia's boyfriend in the first film) was chatting to Glamour magazine at the Tribeca film festival recently about his directorial debut, and the conversation quickly turned to whether he would be reprising his role in the new film. 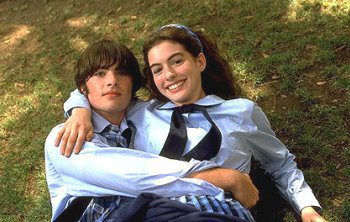 "If they came to me and said, ‘Hey, we want you to continue the series. We did something right the first time. Let's keep going,’ I don't know. You have to take everything one step at a time. I’d have to see where they’re taking it. Like, what do you want to do with the story? What is this character now? What do you want it to be? It'd be cool to at least have the conversation about it if they want to do it.”

We know in the second film that Mia ends up with Chris Pine's character, but in the book series Mia and Michael are happily married, so we will have to wait and see how this one pans out.

popular
You can now apply for tickets to the Late, Late Toy Show
Irish TikTokers are telling their dads they paid €50 for 'premium air' in their tyres
Forget Making a Murderer, This Crime Documentary is Finally on Netflix
Not going anywhere: Baby names set to stay popular for the next decade
Tributes paid to Limerick based blogger and model Patrick McLoughney
You are not imagining it – everyone is about to get obsessed with the colour green
Khloe Kardashian has JUST confirmed she is pregnant
You may also like
5 years ago
A teaser trailer for Fifty Shades Darker has been released and it looks intriguing
5 years ago
Britney Spears has come under serious fire for reportedly miming in Carpool Karaoke
5 years ago
Remember Viktor Krum from Harry Potter? He's unrecognisable these days
5 years ago
Ariel Winter hits back at Instagram body shamers
5 years ago
We've added sarcastic subtitles to popular movies and the results are gas
5 years ago
Former presenter of Art Attack has had a COMPLETE change of career
Next Page