People have said they have been left "sleeping with the light on" after watching Netflix's new horror film, Eerie.

The supernatural film was first released earlier this year, before landing on the streaming service over the summer.

The description for the film reads:

"The unexpected and gruesome death of a student threatens the existence of an old Catholic school for girls.

"Pat Consolacion, the school guidance counselor, involves herself with the students in the hopes of helping them cope, and at the same time uncover the mysteries of the student's death.

"Most students suspect of the strict and borderline abusive Mother Alice, who also threatened Pat's tenure in the school because of her continuous meddling with the case. 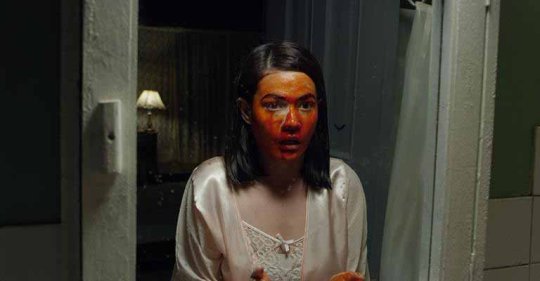 "But Pat's unusual talents lead her to knowing Eri, a former student who's been watching the whole school for years.

"Piece by piece, Pat uncovers the secret of the school and the monster that it nurtured for the past century"

And, judging from the viewers' reactions, the title seems pretty fitting.

People have said the film left them "terrified" and "sleeping with the light on", as they shared their thoughts on Twitter.

watching EERIE on netflix.. ? i have screamed 3 times in 20minutes and there's still 1hr and 20mins left ???

Just watched 'Eerie' on Netflix alone and HFS... I've watched a lot of horror movies and my standards are set really high but this shook the fuck outta me. Amazing film. Definitely one of the best I've seen.

Eerie is on netflix. It is definitely one of the better horror movies Ive seen recently. I feel it doesnt really rely solely on the jumpscares to make it scary, and when it does decide to use jumpscares, there is proper build up that doesnt just shock you. pic.twitter.com/8HSmSSatRM

Just watched Eerie on Netflix and guess who’ll be sleeping with the lights on for a week? ??‍♀️??‍♀️

Watching #Eerie on Netflix alone in a hotel is not a good idea ?


popular
XOXO: Here's everything we know about the Gossip Girl reboot cast
QUIZ: How well do you remember Angus, Thongs and Perfect Snogging (the movie)
Irish Hairdressers Federation to propose guidelines for early reopening of salons
Recipe: 3 ingredient zesty body scrub to give you a stunning spa experience from home
Paul Mescal is raffling off one of his iconic chains in support of Pieta House
'That’s the most honest answer': Skeet Ulrich reveals why he is leaving Riverdale
Eurovision's Daði Freyr has released a new song about lockdown and it's going to be stuck in your head all day
You may also like
1 month ago
10 movies with great friendships that are just made for Netflix Party
1 month ago
QUIZ: Can you guess the Disney movie from its opening line?
1 month ago
Just got Disney Plus? Here are five classic feelgood movies to stream this weekend
1 month ago
J.K. Rowling has launched a brand-new online Harry Potter universe
1 month ago
Here are the 7 best movies on TV this Saturday
1 month ago
Netflix's Love, Wedding, Repeat is the romantic comedy we never knew we needed
Next Page