'Tis the season for reboots upon reboots - we're looking at you Will & Grace, Charmed, Twin Peaks and X-Files.

But it feels like there's rumours buzzing of one possible reboot that just never seem to fade. 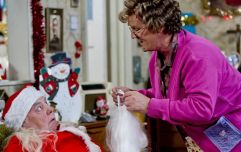 END_OF_DOCUMENT_TOKEN_TO_BE_REPLACED

We're talking, of course, about The Office.

The rumours surrounding the are-they-or-aren't-they reboot have been discussed for a very long time - and gained even more traction in the last few days, all because of one photo.

Over the weekend, ten - yes, ten - of the cast members got together for brunch, alongside the series creator Greg Daniels.

Some of the old gang got together today... it was so great to see everyone! I turned to Ed and said, “I feel like we are at a family reunion.” He smiled and said, “We are.” ❤️ Thanks Greg for hosting! For those who couldn’t make it... you were missed! pic.twitter.com/DwF42lNGHk

However, according to Jenna Fischer, there's going to be "more to come."

We were attempting to recreate this photo :) Happy Holidays! We missed you Steve, Ellie, John, BJ, Mindy, Craig and Kate! We will see you soon! pic.twitter.com/P1kvaxn8FS

Responding to Steve Carrell (who had retweeted her photo and added that he missed them all), she wrote:

"We miss you too Steve! Sorry you had to miss this one. More to come!"

It's not totally clear what Jenna's "more to come" means - or if there's going to actually be a reboot, since nobody mentioned (or hinted at) any kind of filming post-brunch.

Here's hoping we'll be back at Dunder Mifflin soon, though.

Girls With Goals || Her · Ep.151: 'A Story Shared' - Aoife P. Rafter on blogging during a pandemic and living with CF
popular
Rosanna Davison brings her twin boys home to meet their big sister
David Attenborough quits Instagram just two months after joining
Ryan Tubridy announces this year's Late Late Toy Show theme
QUIZ: Can you guess the TV show from the kitchen?
Princess Diana's brother isn't happy with The Crown's depiction of his sister's marriage
Police investigating I'm A Celeb over fears non-native creatures are escaping
Singer Christina Perri shares loss as baby is "born silent"
You may also like
3 days ago
QUIZ: Can you guess the TV show from the kitchen?
2 weeks ago
QUIZ: Can you name these 90s TV shows from a single image?
3 weeks ago
Joe Goldberg will be back on our screens soon as YOU Season 3 production gets underway
3 weeks ago
“Clothes are not essential,” says Minister for State discussing impact of Level 5 on retail sector
1 month ago
Emmerdale and Corrie actor Johnny Leeze dies following positive Covid test
1 month ago
"I had to travel light": Adele jokes about weight loss in SNL appearance
Next Page