Podge and Rodge has reportedly been cancelled after one comeback season

Podge and Rodge came back after being eight years off air. It came back with a shake up too, as Doireann Garrihy replaced Lucy Kennedy and it was filmed in front of a live audience.

However, according to reports, the show has been cancelled after it's first comeback season.

A source told The Irish Mail on Sunday: “It is very disappointing news for everyone involved in the show to be honest.”

“We felt that the show was funny and the live audience really added a new dimension. Doireann was a breath of fresh air and really, for someone who had never done any live television before, she was a real professional.

“But the decision was made by RTÉ to keep it at just one series which is very disappointing." 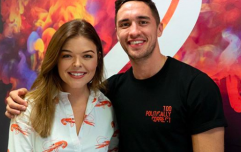 'Extremely professional' No lads, there's no 'romance' between Greg O'Shea and Doireann Garrihy

END_OF_DOCUMENT_TOKEN_TO_BE_REPLACED

Podge and Rodge first made their debut on The Den in 1990, before The Podge and Rodge Show was created in 2006 and went on until 2010 before it went on hiatus.

Meanwhile, it seems like Doireann is now moving on with her career and has created a brand new podcast.

"The Laughs of your Life is a brand new podcast with Doireann Garrihy. In this series, Doireann aims to delve into the beauty of having a laugh, speaking to guests from all walks of life. From first memories of laughter to being laughed at to “if I didn’t laugh I’d cry” moments, these markers will shape the interviews, bringing out the best in some of Ireland’s most influential people," the podcast blub reads.