In a hypothetical list of things you shouldn't do, we reckon that pissing off The Rock would probably feature quite highly.

Filming for the latest film in the Fast & Furious franchise wraps up this week, and Dwayne Johnson is seemingly not happy about something on set.

In an explosive Facebook post, he paid homage to the hard-working crew and female co-stars in Fast 8, but tore into the male contingent of the cast, some of whom were branded as 'chicken shit' and 'candy asses' by the wrestling legend.

Johnson didn't name any names in his rant, and until now there had been no indication from the star that he had beef with anyone in the movie.

"This is my final week of shooting Fast & Furious 8. There's no other franchise that gets my blood boiling more than this one. An incredible hard working crew. Universal Studios Entertainment has been great partners as well. My female co-stars are always amazing and I love 'em. My male co-stars however are a different story."

Johnson added that fans should look out for the scenes in the film where he looks particularly fired up and angry - as this was reflective of the mood he was in at the time.

"Some conduct themselves as stand up men and true professionals, while others don't. The ones that don't are too chicken shit to do anything about it anyway. Candy asses. When you watch this movie next April and it seems like I'm not acting in some of these scenes and my blood is legit boiling - you're right.

"Bottom line is it'll play great for the movie and fits this Hobbs character that's embedded in my DNA extremely well. The producer in me is happy about this part. Final week on FAST 8 and I will finish strong.
#IcemanCometh #F8 #ZeroToleranceForCandyAsses." 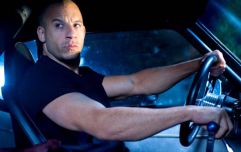 END_OF_DOCUMENT_TOKEN_TO_BE_REPLACED

Here's the full post, which also features a short clip of The Rock's character, Hobbs, chucking what appears to be an armed security guard against the wall. We already know that Hobbs has been on the wrong side of the law in the film, after Johnson posted a photo of himself looking pretty moody in a prison cell to Instagram.

popular
QUIZ: How well do you remember The Princess Diaries?
Will Smith admits to 'failing miserably' in 21-year marriage to Jada Pinkett Smith
QUIZ: How well do you remember the 2005 movie Pride & Prejudice
Here's what happens on every day of your menstrual cycle (roughly)
5 new additions to Netflix to spend your Saturday night watching
Easy breezy: 5 comfy summer dresses you'll want to live in right now
Brooklyn Beckham won't let a 10 year age gap get in the way of his new romance
You may also like
10 months ago
Dwayne 'The Rock' Johnson has just married his longtime girlfriend Lauren Hashian
1 year ago
The Rock went above and beyond for three incredible kids (he even baked them cookies)
1 year ago
The Rock says he's 'one lucky SOB' to be able to surprise his mum with an extravagant present
2 years ago
The Rock and Charlie from Busted got into a spat on Twitter... and honestly, what?
2 years ago
The Rock wrote the sweetest thing about his 'main squeeze' on Instagram
2 years ago
The Rock celebrated his birthday and his cake is the funniest thing we've seen
Next Page