Riverdale fans - we have some pretty devastating news.

Two of the main characters in the show have announced that they are leaving.

“I’m incredibly grateful for the friendships I’ve made on Riverdale, and I will miss seeing everyone on a daily basis,” Ulrich said in a statement given to TVLine, who broke the news.

“I’m proud to have been part of such a talented group of people, in front of the camera and behind. But I’ve decided that it’s time for me to move on to explore other creative opportunities.”

❤️ #Riverdale is all new tonight

Speaking about her own exit, Marisol said: 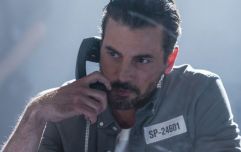 END_OF_DOCUMENT_TOKEN_TO_BE_REPLACED

"I had an incredible time bringing Hermione Lodge to life and working with my amazing cast, who became family."

"We had so many wonderful times together during the highest of highs and the lowest of lows. We really do have the best fans ever. I am looking forward to the next chapter and am excited about the future."

And while there's no word yet as to how exactly the characters will be written out of the show, we have no doubt it will be dramatic.

popular
4 new additions to Netflix to spend your weekend watching
QUIZ: How well do you remember the first episode of Gilmore Girls?
Selling Sunset's Chrishell Stause reveals "the brokerage has split"
Paul Mescal didn't win an Emmy and that's okay
5 Netflix releases to keep an eye out for in October
Kate Middleton has addressed the rumours that she's pregnant with her fourth child
Here's what happens on every day of your menstrual cycle (roughly)
You may also like
4 months ago
There’s going to be a massive change to Riverdale when it returns for season five
6 months ago
Riverdale shuts down production on season four amid coronavirus fears
6 months ago
Riverdale has finally revealed Jughead's fate once and for all
6 months ago
The creator of Riverdale appears to have just confirmed a major death
6 months ago
Why fans are convinced season four of Riverdale is going to end with a massive time jump
6 months ago
Kiernan Shipka has teased a Chilling Adventures of Sabrina crossover with Riverdale
Next Page