The Story of Tracy Beaker is getting a sequel and this time, she's all grown up

One of our favourite books from our childhood is set to return.

Dame Jacqueline Wilson has confirmed that she is writing another sequel to the much-loved The Story of Tracy Beaker.

For those of you who don’t remember, the book tells the story of orphan Tracy who lives in a care home and usually finds herself in all sorts of bad situations. 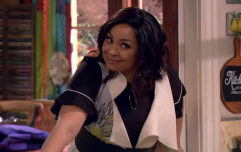 END_OF_DOCUMENT_TOKEN_TO_BE_REPLACED

Since the original, Jacqueline has added three more books added to the series and, of course, the popular TV show.

The show ran for five seasons from 2002 till 2005, and was followed by spin-offs like Tracy Beaker Returns, telling the story of Tracy in her new role as a social worker, and The Dumping Ground, with Tracy gone they focussed on the stories of the other children in the care home.

However, Tracy is now all grown up and Jacqueline says her next chapter will focus on her life as a mum and career woman.

Unlike the original, the new book will be narrated through Tracy’s daughter’s point of view.

popular
Irish girls name was the most used Irish name in the United States last year
Why Are Men so Obsessed With Boobs? The Answer is Pretty Surprising...
Woman saved from hostage situation after leaving note on food delivery order
Love Island's Remi says arguments with Jacques "ruined" his time on the show
Buying fake designer goods abroad this summer can have some serious consequences
This high street interior collection is everything we want out outdoor space to look like
There's a new online Spotify game and you legit won't be able to stop playing it
You may also like
9 months ago
The youngest sibling is the most fun, according to science
3 years ago
Ranking childhood board games from least to most satisfying to cheat at
3 years ago
Here's how to revel in the nostalgia and WIN an illustration of your favourite childhood memory
3 years ago
7 ways Tots TV lied to us about the life of a toddler
3 years ago
Study says that these childhood experiences can affect our health for life
4 years ago
Our Irish nostalgia quiz will tell you if you're really Irish at all!
Next Page