She even has a part in mind.

You might know Millie Bobby Brown better as Eleven, the psychic badass who carries much of the Stranger Things universe on her adolescent shoulders.

Whilst undoubtedly an incredible actor in her own right, Millie has come up with another name she'd like to join her on set for a future series of the supernatural Netflix hit. In a recent interview she revealed that Leonardo DiCaprio would be a welcome addition to Stranger Things, and even knows what role she wants him to play.

The 14-year-old is the youngest ever entrant into TIME's 100 Most Influential People list, so whilst it may sound ridiculous, she could definitely pull some strings. 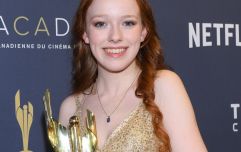 END_OF_DOCUMENT_TOKEN_TO_BE_REPLACED

"Leonardo DiCaprio. Leonardo is Eleven’s long-lost brother. I have already made a story line," she said, speaking to Press Association.

She even added: "Leo, if you want to be in Stranger Things, here’s the contract."

Unfortunately shooting for the third series is already underway, meaning there isn't much hope of getting the Titanic and The Wolf of Wall Street star in for now, but you never know...

Sorry. I'll show myself out. Sorry.

popular
Mother charged with murder of three children in New Zealand
Dublin nurse scammed out of all her savings warns others
Derry Girls star speaks out after show called "distinctively British"
Maura Higgins reveals NTA ordeal after man tried pulling her into a car
The 'secret' Zara label signs that'll apparently help you get the right size every time
Waterford man jailed for six months for sexual abuse of niece
Billie Eilish's second Met Gala dress is beyond stunning
You may also like
9 months ago
Millie Bobby Brown: "I just wish people were more respectful"
1 year ago
Netflix have released the first teaser for season four of Stranger Things - and have confirmed Hopper's fate
1 year ago
Millie Bobby Brown just shared more details about season 4 of Stranger Things
1 year ago
The first look at Penneys' Stranger Things collection is here
1 year ago
Lily Allen and Stranger Things' David Harbour are the best thing to come out of this year
1 year ago
Stranger Things is the most talked about TV show of the past two years and yeah, fair enough
Next Page