So much to come.

The bestselling novel The Tattooist of Auschwitz is set to be adapted into a new TV drama, Sky has announced.

The novel was written by New Zealand author Heather Morris and released back in 2018, telling the story of Slovakian Jew Lale Sokolov who was imprisoned at Auschwitz in 1942. 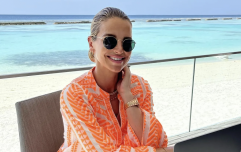 END_OF_DOCUMENT_TOKEN_TO_BE_REPLACED

The story follows him falling in love with a girl he is tattooing at the concentration camp at the height of World War Two.

The new adaptation will be six episodes long and will tell of the love story as Sokolov meets Gita as she is standing in line waiting to have her identification number tattooed on her arm.

The news was announced by the TV broadcaster at their Up Next 2022 event.

The broadcaster also announced there were three new comedies set to feature on the channel starring some of the UK's biggest talent.

Romesh Ranganathan and Katherine Ryan will be staring in Romantic Getaway, the story of a couple desperate to have a baby but have run out of money for IVF and decide to "borrow" £50,000 from their rich boss.

popular
Tonight's episode of Love Island will be extended due to "explosive" recoupling
Hang on, Tasha and Coco know each other already?
Reports of image based sexual abuse involving 200 women investigated by Gardaí
WATCH: Gemma is left fuming in tonight's Love Island as Luca kisses another girl
Love Island: Mollie's family issue apology following allergy comments
Love Island fans think someone has left after Luca arrives back to empty bed
Ireland expected to be hotter than parts of Spain this weekend
You may also like
5 months ago
New Korean horror series All of Us Are Dead lands on Netflix this weekend
5 months ago
Channel 4 announces a Come Dine With Me spin off but with a brand new twist
8 months ago
Friends fans point out major hilarious plot hole
8 months ago
You can be in the audience of an iconic US game show filming in Dublin next month
8 months ago
You can now live in the iconic house from Sabrina The Teenage Witch
8 months ago
Kate Middleton might be getting her own TV show
Next Page