The first trailer for the Downton Abbey movie is officially here

The first trailer for the Downton Abbey movie is officially here.

END_OF_DOCUMENT_TOKEN_TO_BE_REPLACED

However, thankfully for Downton Abbey fans, a feature film was later confirmed - and now the first trailer for the film is finally here. 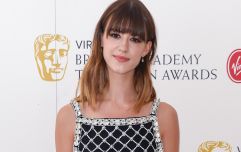 END_OF_DOCUMENT_TOKEN_TO_BE_REPLACED

The Downton Abbey movie will be released in cinemas in Ireland on September 13. But in the meantime, you can check out the trailer below.

Girls With Goals || Her · Ep.161: Feeling Peachy - Sharon Keegan of Peachylean on being an absolute BOSS!
popular
Big Brother star left temporarily blinded and scarred after TikTok DIY beauty 'hack'
More footage of Tristan Thompson cheating on Khloe has emerged
How to INSTANTLY unblock your stuffy nose (we swear this works)
Someone has ranked the penis size of men from all over the world
The First Quadrillionaire? Paypal Accidentally Gives Man $92 Quadrillion
Here's what happens on every day of your menstrual cycle (roughly)
Is that Seth Rogen without a beard?
You may also like
2 months ago
Paul Mescal cast in new Irish thriller movie
2 months ago
A second Downton Abbey film is on the way
3 months ago
QUIZ: How well do you remember Angus, Thongs and Perfect Snogging (the movie)
3 months ago
Wicked the musical is officially being turned into a movie
3 months ago
WATCH: The trailer for To All The Boys I've Loved Before part 3 is here
5 months ago
QUIZ: How well do you remember The Lizzie McGuire Movie?
Next Page