There's not long left to go until Downton Abbey opens its doors again.

With the film set to hit Irish cinemas in just a few weeks (September 13, FYI), film bosses have given fans a behind-the-scenes look at the highly-anticipated Downton Abbey film.

END_OF_DOCUMENT_TOKEN_TO_BE_REPLACED

The featurette gives fans insight into the production of the film, as some of the key cast members - like Michelle Dockery, Allen Leech and Jim Carter - share their thoughts on the film.

And it sounds like Downton is going to be more glorious than ever. 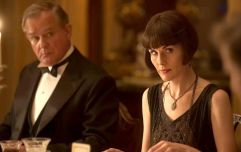 END_OF_DOCUMENT_TOKEN_TO_BE_REPLACED

Downton Abbey is out in cinemas in Ireland on September 13.

Girls With Goals || Her · Ep.161: Feeling Peachy - Sharon Keegan of Peachylean on being an absolute BOSS!
popular
Big Brother star left temporarily blinded and scarred after TikTok DIY beauty 'hack'
Someone has ranked the penis size of men from all over the world
More footage of Tristan Thompson cheating on Khloe has emerged
Is that Seth Rogen without a beard?
How to INSTANTLY unblock your stuffy nose (we swear this works)
Fantastic Beasts star Kevin Guthrie jailed for three years following sexual assault
Khloe Kardashian has JUST confirmed she is pregnant
You may also like
1 year ago
Grab the popcorn because all six seasons of Downton Abbey are on NOW TV
1 year ago
The producer of the Downton Abbey movie has revealed they are working on a sequel
1 year ago
Downton Abbey producer Liz Trubridge on the possibility of a second movie
1 year ago
The real life Downton Abbey is available to rent on Airbnb for a once in a lifetime experience
1 year ago
6 reasons to go and see Downton Abbey as it hits the cinema today
1 year ago
7 pieces to add to your wardrobe that will give a nod to Downton Abbey
Next Page