And she's not happy about it.

With Holly Willoughby stepping away from This Morning last month to prepare to head down under for the upcoming season of I’m A Celeb, a spare seat opened up alongside Phillip Schofield.

Yes, rumours around who would replace Holly were constant in the weeks leading up to Holly's departure, with Rochelle Humes eventually getting the role.

However, another TV personality was a strong contender, reportedly hearing she had secured the role before it all changed.

Amanda Holden is no stranger to TV viewers, and similarly, This Morning viewers, having hosted the show numerous times, so it was no surprise that her name was included in the list of possible replacements for Holly.

However, Amanda reportedly made it a lot further than most but eventually missed out.

“Amanda was so excited when she learnt she had secure the role,” a source told The Sun.

“So she was shocked when she was taken out to lunch by ITV executives who told her that unfortunately, they couldn’t follow through with the offer.

“During the lunch, they let slip they thought the decision had been heavily influenced by Phillip and that he had thrown a spanner in the works.

“Not only had she cleared her work calendar to fit in the dates but she couldn't understand why Phillip might not want her to be his co-host, as she thought they had a great personal and professional relationship.” 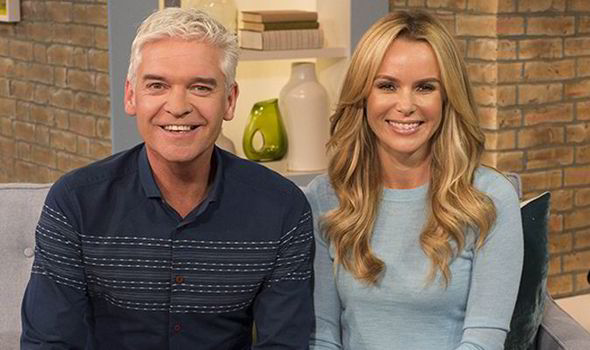 A short while after, Amanda appeared on the show to be interviewed by Phillip and Holly about her work with the charity Tommy’s.

According to sources, she confronted Phillip during the ad break and shared her upset.

popular
Aldi's velvet stools are just €25 and don't call us basic for wanting a pink one
From Miami to Mallow: The Irish Instagram star who's renovating an old post office during lockdown
After days of silence, Scott and Sofia finally comment on the break up rumours
Paul Mescal wore O'Neill's shorts while carrying cans of pink gin so I bought O'Neill's shorts and cans of pink gin
This amazing hanging egg chair is coming into Aldi next week and go, go go (but safely)!
Can you spot the real Donald Trump tweets among these equally ludicrous fake ones?
Lidl launches new pre-mixed gin cocktails, right in time for the weekend
You may also like
5 months ago
Red carpets, Adidas and oysters: Our top 10 fashion moments of 2019
1 year ago
Emma Louise Connolly reveals her plans for a traditional wedding with a modern twist
1 year ago
This ONE brand was spotted on all the celebrities at Coachella this year
1 year ago
Malika Haqq just went in on Jordyn Woods AGAIN ahead of her 'tell-all' interview
1 year ago
Rihanna is blessing us again by launching new lip paint shades for her Fenty Beauty line
1 year ago
I'm A Celeb viewers were PISSED when Nick Knowles said this last night
Next Page