This cat is an icon.

A cat has just made everyone on the internet burst out laughing after it photobombed a Sky News report last night.

Deputy political editor Sam Coates was trying to deliver the news that Boris Johnson's partygate scandal was causing him to pay a hefty fine, but all the attention went somewhere else during the broadcast.

As he reported live on air, Sam's pet cat decided to make an appearance in the shot and his appearance didn't go unnoticed.

Presenter Mark Austin made sure to point out the fluffy intruder, making sure all viewers at home got to witness it. 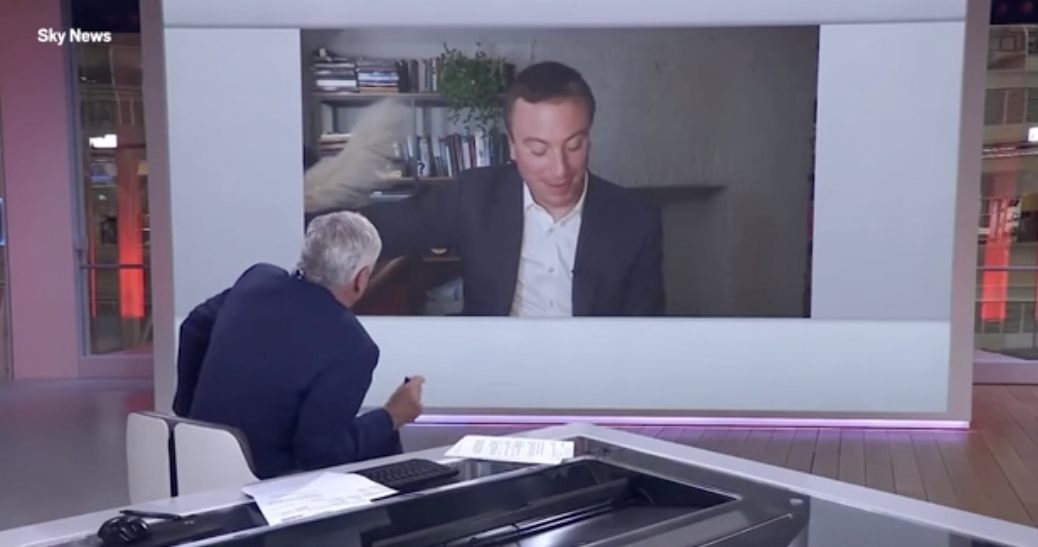 "He’s got his cat there with him, I’m very pleased to see that," the host said before adding: "So, some news about Carrie Johnson?"

END_OF_DOCUMENT_TOKEN_TO_BE_REPLACED

Trying to ignore what was happening with his cat, he continued to read a statement from Johnson's spokesperson, but the cat's paws were still on the screen.

Once his report was finished, Mark again brought up the photobomber once again, saying: "Sam Coates dealing with his cat and a big story. Thank you very much indeed."

Viewers were left in stitches over the cat's appearance, praising the unplanned cameo as it brought some ease to the broadcast.

END_OF_DOCUMENT_TOKEN_TO_BE_REPLACED

One person wrote: "@SamCoatesSky trying to keep his cat off-screen whilst simultaneously landing a big story is exactly what I need from my news coverage."

A fourth said: "I wanted to see all of the cat and hoped it would have got past him and jump onto his lap. The main attraction."

popular
Tom Parker's wife suffers more heartbreak just nine months after husband's death
Fans are feeling seriously sorry for Molly Mae Hague after resurfaced interview
Father took daughter to hospital three times before she died of Strep A
Maura Higgins claims she was left by designer who went to style someone else at an award show
He may be a politician, but Leo Varadkar's personal life is none of our business
Woman dies in Mexico after couple "cut" unborn baby from her womb and claim it's theirs
Here are our top picks from this week's Lidl Toy Event
You may also like
2 days ago
We could be getting snow this Thursday, according to Met Éireann
1 week ago
Rules around blood donation have changed in Ireland as of today
3 weeks ago
Iran has issued the first death sentence for protesting
3 weeks ago
Iranian actress Taraneh Alidoosti removes headscarf in social media post
4 weeks ago
Government's five-day domestic violence leave plan criticised
2 months ago
Meteor shower to be visible over Ireland tomorrow
Next Page