'She seems a bit of a natural...' So Princess Charlotte has a new pastime

She's just two-and-a-half - a time when most of us would be concerned with the likes of toilet-training and mastering speech.

However, Princess Charlotte is a royal, and thus she has advantages and privileges that most of us can only dream of.

Case-in-point? The little one has taken up tennis at an exclusive south-west London club - and apparently she's a total natural. 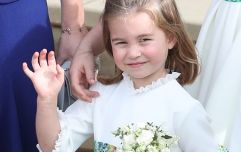 END_OF_DOCUMENT_TOKEN_TO_BE_REPLACED

Of Wills and Kate's decision to enroll her in classes, Sun.co.uk reports: “She might not be three until May but they were convinced she’d love it and so far she has."

However, some controversy surrounds the Cambridges - namely because they've fast-tracked Charlotte into the posh Hurlingham Club... despite not being members themselves.

A source told the publication: "Unfortunately some patrons feel Charlotte shouldn’t be allowed to play there.

"Club rules are usually very rigid, and they don’t see why exceptions should be made, even if they happen to be royal."

The club is set in 17 hectares in Fulham. It boasts more than 40 tennis courts, a pool, a cricket square, ten croquet lawns, and two bowls areas.

A description on its websites says it is "recognised throughout the world as one of Britain’s greatest private members’ clubs".

It adds that Hurlingham "retains its quintessentially English traditions and heritage, while providing modern facilities and services for its members".

The Duchess of Cambridge and her family - including siblings Pippa and James - are big fans of tennis and regularly attend games at Wimbledon.

Girls With Goals || Her · Ep.161: Feeling Peachy - Sharon Keegan of Peachylean on being an absolute BOSS!
popular
Couple who can't agree on child’s name decide to each call her different things
This wedding hangover kit is going viral on TikTok
Four day working week pilot scheme launched in Ireland today
Love Island featuring show's first contestant with a disability
Bartender praised for passing note after man harassing women in bar
Irish woman tragically drowns in the south of France
The DIY frozen coffee recipe that's so delicious you'll never pay for an iced latte again
You may also like
3 months ago
George, Charlotte and Louis make Mother's Day cards for Granny Diana and reveal "papa misses you"
1 year ago
Kensington Palace shares a previously unseen photo of Princess Charlotte and it's just adorable
1 year ago
Princess Charlotte received sweet gift from a fan when entering the church on Christmas Day
1 year ago
Princess Charlotte melts hearts with 'adorable' curtsy to the Queen on Christmas Day
1 year ago
The Cambridge family Christmas Card is here and it's seriously adorable (LOOK at Prince Louis)
1 year ago
Kate Middleton arrives for Christmas lunch with the Queen and her outfit is impeccably festive
Next Page