There are some things that are immediately recognised as being traditionally Irish such as our penchant for a good old crisp sandwich or our belief that a cup of tea solves every problem.

However, the Irish are also pretty well known for having a lot of random food combinations that many others just don’t really get.

Here are some of our weird and wonderful favourites.

There is only one snack that can take the number one spot for Irish people. Regardless of whether you are a King or Tayto lover, crisp sandwiches are the ultimate comfort food.

We’ve all been there – either indulging ourselves after a night out, or surrounded by friends who do. Curry cheese chips are another firm favourite and people get VERY protective over their portion.

The ultimate after school snack, whoever thought of putting butter on Rich Tea or Digestive biscuits was an absolute genius.

There is certainly a lot of grá for this dish, particularly in Dublin.

Yes, you did read that right. Apparently, this is a firm favourite for many.

One of the old favourites and the ultimate reminder of your grandparent’s house, bacon and cabbage was a firm staple of the Irish diet.

Chicken fillet rolls and… well anything

There is a slight obsession in Ireland for chicken fillet rolls, mixed with pretty much anything. Rumour has it there’s a few people who like adding curry sauce…

The greasy fry-up the morning after the night before is not just an Irish tradition, but from adding mackerel to boiled potatoes, fried bread to lamb chops, the Irish certainly know how to put their own spin on it.

The childhood comfort food for many, banana sandwiches are another slightly random – but pretty good – snack… until you put a slice of corned beef in. Yes, people do that.

Irish people love nothing more than a good chicken curry… but most of us give into the half and half temptation of chips and rice. Or just chips.

Pizza with tomato ketchup sprayed across the top of? That's definitely a weird one in our books. A number of people who shall remain unnamed have admitted to mashing red sauce into their potatoes too.

Fancy some cereal for breakfast or maybe some toast? Why not try and combine the two and eat a cornflakes sandwich. It has happened. And it was good.

If you are anything like us and love nothing more than a cheese toasty under the grill, why not try one of our Her.ie writer’s recommendations and sprinkle some of a red OXO cube on top as the cheese melts? Apparently, that’s a thing. 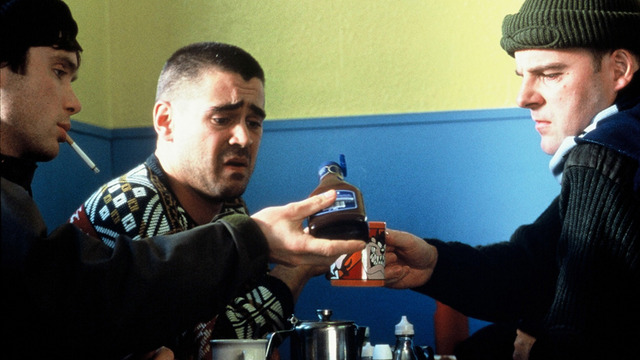 How many people tried the tea with brown sauce combination from Intermission? We couldn't do that to a cup of tea!

popular
Kim Kardashian addresses Balenciaga's disturbing campaign
Shawn Mendes (24) is reportedly dating Dr Jocelyne Miranda (50)
Nicola Coughlan is raffling her Bridgerton bag for LauraLynn
Jill Scott makes history with I'm A Celeb victory
US fast food chain Wendy's planning to open in Ireland
Lindt releases a new hot chocolate just in time for Christmas
3 simple tips to get your nails in shape ahead of Christmas
You may also like
3 months ago
Irish person dies after drowning in Spanish resort swimming pool
5 months ago
Irish lad heading to Love Island villa as contestants are announced
6 months ago
Louise O'Neill: "It sometimes feels like we need to share our stories to be accepted as humans"
6 months ago
Tributes paid to Irishman found dead in LA after missing for weeks
8 months ago
7 of the best Irish prints you can buy on greeting cards now
9 months ago
Viewers left in shock after video of American woman making a cup of tea
Next Page