A bride in the US has gone viral after she was presented with a bouquet of chicken nuggets instead of flowers on her special day.

Blair Hardy's bridesmaid and cousin Jenna Spetz decided to get creative when she was tasked with making a speech. As Blair's partner's name is Adam Tyson, Spetz wanted to mark the occasion of her becoming a member of the Tyson family. 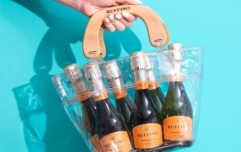 END_OF_DOCUMENT_TOKEN_TO_BE_REPLACED

What's more, Blair loves chicken nuggets. With that in mind, Spetz reached out to the American company Tyson's foods to see if they could put together an extra special arrangement.

She told Insider: "Blair always loved Dino nuggets and was marrying a man with the last name Tyson, so it really was a match made in heaven."

The bridesmaid explained to the publication that she wanted to do something different to surprise Blair.

She said: "When I was thinking about my speech, I was trying to come up with something I could surprise Blair with. Nuggets immediately came to mind. I wasn't sure at what medium though or how I would even pull something like that off." 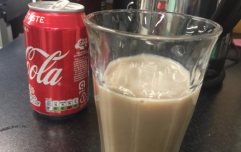 You've been repulsed by 'Milk Coke', but now it's time for far worse

END_OF_DOCUMENT_TOKEN_TO_BE_REPLACED

Knowing that if you don't ask, you don't get, Jenna took a chance and reached out to Tyson's, but didn't expect anything to come of it.

Jenna said: "I really didn't expect my inquiry to go any further than an auto-reply from customer service." 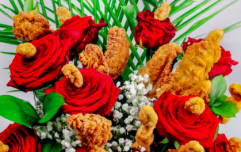 END_OF_DOCUMENT_TOKEN_TO_BE_REPLACED

However, Tyson's came through. Not only did they respond, they arranged for a special chicken nugget bouquet to be sent out to Jenna.

The bridesmaid then presented the bouquet during her speech, and described her reaction as "pricesless".

"She was grinning from ear to ear," Jenna said.

The bridesmaid added that while Adam didn't look too chuffed in the photos, he was actually "living for it."

We'll take your word for it, Jenna!

popular
Tommy Fury responds to Jake Paul ruining his baby news
Looks like Maura Higgins knew Molly-Mae's baby name this whole time
Here's why Nicola Peltz-Beckham's family are suing her wedding planners
Chrishell Stause faced "unbelievable" trolling for relationship with G-Flip
Love Island's Zara speaks out after being dumped from the villa
Why Are Men so Obsessed With Boobs? The Answer is Pretty Surprising...
We're all getting Hailey Bieber's new box bob haircut in 2023
You may also like
8 months ago
WATCH: People are losing it over clip of Kendall Jenner trying to climb stairs at Kourtney's wedding
9 months ago
Hilarious moment Irish Rail passenger spots "collapsed man" on platform
1 year ago
TikToker fakes a wedding photoshoot to get back at ex
1 year ago
You's Penn Badgley and Cardi B are fangirling over each other on Twitter
1 year ago
These newlyweds wore tracksuits to their reception
1 year ago
Tom Daley went viral for knitting at the Olympics - and it's all for charity
Next Page