McDonald's have revealed how to make your own sausage and egg McMuffin at home - and yeah, we're definitely trying this ASAP.

On March 22, the restaurant announced that all of its outlets in Ireland and the UK would be closing indefinitely due to the coronavirus.

And while people can't get the real-deal version of the sausage and egg McMuffin at the moment, McDonald's have revealed how to whip one up at home yourself.

And, because it wouldn't be a sausage and egg McMuffin without a hash brown, McDonald's have shared how to make your own version of the breakfast go-to - all you need is a potato and an egg.

You can check out the recipe card from McDonald's below. 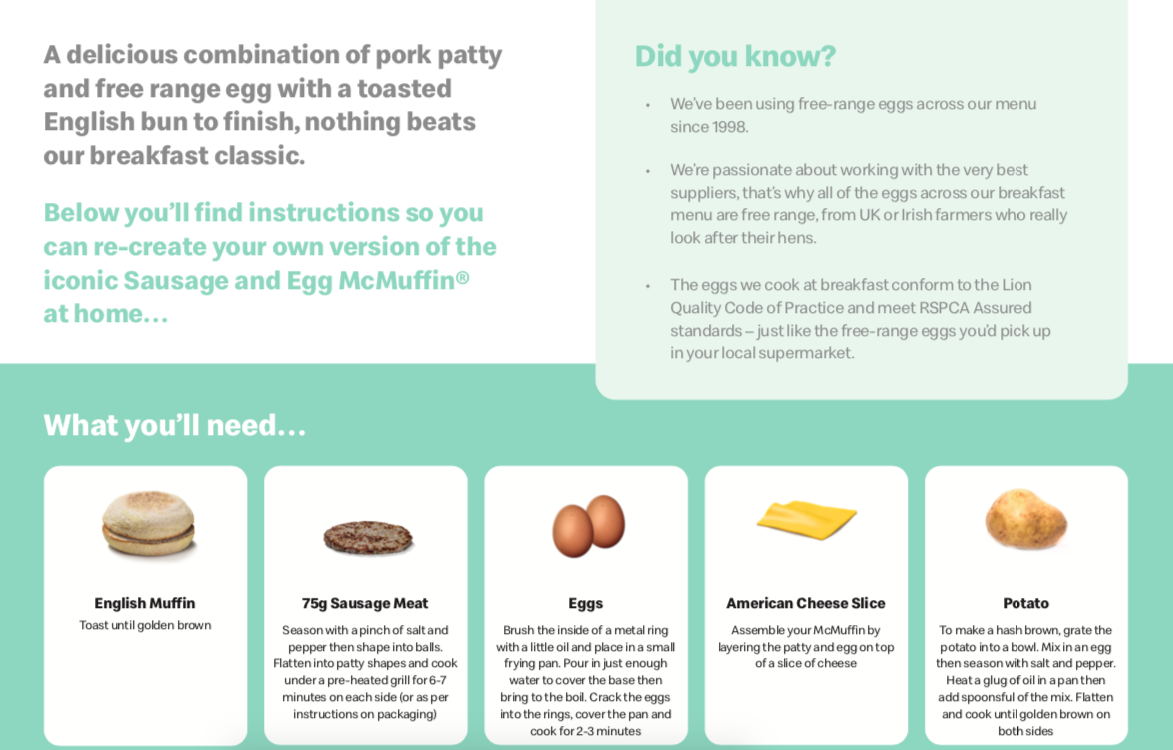 Girls With Goals || Her · Ep.151: 'A Story Shared' - Aoife P. Rafter on blogging during a pandemic and living with CF
popular
The Queen has banned Meghan Markle from wearing any of Princess Diana's jewellery
Royal family "concerned" that Meghan kept secret diary during time in UK
Someone has ranked the penis size of men from all over the world
The way Diana told William about Charles's affair with Camilla will break you
Kate Middleton has addressed the rumours that she's pregnant with her fourth child
Gwen Stefani reportedly pregnant with baby number four
If you constantly have a cold nose, this could be the reason why
You may also like
6 months ago
All McDonald's Drive-Thrus to reopen in Ireland on June 4
6 months ago
Here's what you can order on McDonald's new limited Drive-Thru menu in Dublin
6 months ago
Certain McDonald's Drive-Thru outlets are reopening in Dublin next week
8 months ago
#Covid19: ALL McDonald's restaurants to close indefinitely across Ireland and UK
8 months ago
McDonald's removes all seating areas in attempt to tackle coronavirus
9 months ago
PSA: McDonald's is selling breakfast pancakes ALL DAY tomorrow
Next Page