Mark your diary! We have a release date for this limited-edition pink gin

Gin. But not as we know it.

Yes, it was revealed earlier this week that Gordon's is releasing a limited-edition PINK gin.

And needless to say, the response was extremely positive, with much of the interest applauding the decision.

But while the drink is currently available in the UK, it has not been released in Ireland.

Her, however, has a date for your diary: we can reveal that Gordon's pink gin will land in Irish Tesco stores in mid-August... which basically means you have four weeks to prepare yourselves. 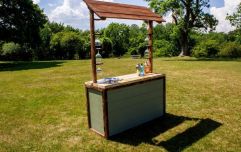 PSA: You can now rent a pop-up gin bar to your Dublin gaff

END_OF_DOCUMENT_TOKEN_TO_BE_REPLACED

"Inspired by an original Gordon’s recipe from the 1880s, the pink gin is perfectly crafted to balance the refreshing taste of Gordon’s with the natural sweetness of raspberries and strawberries, with the tang of redcurrant served up in a unique blushing tone," the brand said in a statement.

popular
4 new additions to Netflix to spend your weekend watching
QUIZ: How well do you remember the first episode of Gilmore Girls?
Selling Sunset's Chrishell Stause reveals "the brokerage has split"
Paul Mescal didn't win an Emmy and that's okay
5 Netflix releases to keep an eye out for in October
Here's what happens on every day of your menstrual cycle (roughly)
"I was petrified and wanted a hand to hold:" Irish women call for the ease of maternity restrictions
You may also like
5 days ago
WIN: The ultimate staycation in Glengarriff, Cork, for you and five friends
2 weeks ago
Taste the Italian summer with Gordon's Sicilian Lemon Distilled Gin giveaway
3 months ago
Raise a glass! Study says that gin & tonic can help soothe hay fever
3 months ago
People who drink gin are sexier, according to science
6 months ago
Gordon's launches a brand new peach gin and HELLO summer
6 months ago
Gin, coffee, cocktail competitions and more - get your food and drink on at Dublin Drinks Mixer
Next Page