This VEGAN chicken fillet roll has everyone in Dublin going crazy

OK, we need this in our lives ASAP.

Whether you're taking part in Veganuary - or being a vegan is your lifestyle choice - then you are going to adore this vegan chicken fillet roll.

This vegan version was put together by the Vegan Sandwich Company which is in the early stages of creation. However, a trial run of the roll was completed over the weekend and everyone on social media went wild for it.

Did my first test kitchen this weekend for a vegan chicken fillet roll. Would you like to see this on the menu?

Comments on Instagram included, "Yes! I can't wait to try this," and "If it comes with a spicy sauce I am in! *I'm in anyway!"

It looks exactly like a chicken fillet roll you'd get from the local deli down the road, but instead it was made with homemade bread rolls, lettuce, tomato, vegan cheese, vegan mayo and the chicken substitute was seitan. 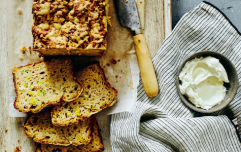 END_OF_DOCUMENT_TOKEN_TO_BE_REPLACED

We spoke to Sam, who is behind Vegan Sandwich Company, about the making of the vegan chicken fillet roll, which he said has been quite a long time in the making.

"This recipe has been quite a long time in the making and I've tried just about every meat substitute under the sun.

"Other meat substitutes just didn't quite have the same bite as seitan and for something as iconic as a chicken fillet roll, it had to be perfect. The final product is a herb-filled seitan fillet covered in spicy sourdough breadcrumbs with vegan cheese, vegan mayo, lettuce and tomatoes."

Guys, we actually need this in our lives right now.


popular
10 stunning – and unique – Irish baby names that are not too popular yet
Penneys is currently selling the PERFECT white blouse, and it's only €15
Everyone has the same prediction ahead of tonight's episode of Love Island
River Island's floral €60 dress is the first piece you'll want for your spring 2020 wardrobe
Chrissy Teigen did NOT hold back when responding to criticism of her son's outfit
Holly Willoughby wore a gorgeous €59 shirt from Massimo Dutti this morning
We are absolutely in love with this cute €29 teddy jacket from the Zara sale
You may also like
2 weeks ago
Soya, supplements, and seitan: The unstoppable growth of veganism in Ireland
2 weeks ago
Say hello to Aldi's new low-calorie wine and low-alcohol prosecco
2 weeks ago
Move over, cheese boards – fries boards are what you'll be serving in 2020
2 weeks ago
Batches of Doritos tortilla chips recalled due to allergy concerns
2 weeks ago
Say hello to the chicken nugget and mozzarella dippers pizza
2 weeks ago
One of our favourite Dublin stores is giving away free dumplings at the end of the month
Next Page