Ireland's abortion laws to be reviewed by independent expert

The review has been confirmed by the Department of Health.

Ireland's abortion laws are expected to be reviewed by an independent expert over a series of consultations in a number of weeks.

The review comes three years after Ireland voted to repeal the Eighth Amendment 66.4% to 33.6%

END_OF_DOCUMENT_TOKEN_TO_BE_REPLACED

The Termination of Pregnancy Act has a clause which states that legislation must be reviewed three years after it's implemented, however, an Irish Times source said that it's unlikely the review will lead to changes.

Section 7 of the Act says: "The Minister shall, not later than 3 years after the commencement of this section, carry out a review of the operation of this Act."

The upcoming review has been confirmed by the Department of Health, who have said that the independent expert will make recommendations to Ireland's Minister for Health, Stephen Donnelly.

A spokesperson for the department said: "The review is being progressed this year. At this stage it is anticipated that the review will take a three-part approach to reviewing the operation of the Act, with strands focusing on service users, service providers and a public consultation.

"Research to inform the service user and service provider strands will be commissioned and carried out independently and a public consultation will be held."

She added: "The Minister intends to appoint an independent expert to lead the review. Upon completion, a full report with any necessary recommendations, will be submitted to the Minister for consideration." 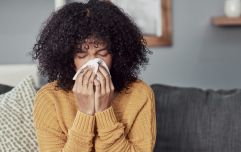 3 simple, natural ways to strengthen your immune system ahead of cold and flu season

END_OF_DOCUMENT_TOKEN_TO_BE_REPLACED

The independent review comes amid fresh calls for safe zones at Ireland's abortion facilities. These zones, which would make it illegal for protests to take place within a specific radius of clinics, had been originally promised by the former Minister for Health Simon Harris.

Mr Donnelly has said that he is working with government officials to maintain "safe access" to abortion facilities.

popular
Family of four found dead in hotel sauna
"Real-life consequences": Strictly's Adam Peaty addresses near-kiss rumours
Little Mix's Leigh Anne Pinnock addresses haters in tearful speech at 30th birthday party
Shirley Ballas books breast exam after Strictly viewers spot lump
It looks like it's all over between Maura Higgins and Giovanni Pernice
HSE chief Paul Reid says it's "time to hit the reset button" as hospitals battle Covid surge
Apparently, THIS is the reason why Louise Redknapp split from Jamie Redknapp
You may also like
23 hours ago
Kate Garraway in hospital with eye infection
1 week ago
Nurses to protest working conditions at Connolly hospital today
1 week ago
10 small habits that will make you happier, healthier and less stressed
1 week ago
Woman charged fee for "brief emotion" during mole removal
1 week ago
Did you get 'Covid toes?' Research shows new side effect of virus
2 weeks ago
Wellness: 5 easy ways to get back into a healthy routine for the colder season
Next Page