Addicted to coffee? Here's why it's not your fault

For many people coffee is their lifeline, they can't wake up properly without it, can't function past lunch time unless they have a second cup, and could never do a late shift without having another.

And while a lot people complain to their friends about having too much coffee and promise themselves they'll cut down or give up, it may be a lot harder for some people than others.

This is all because of science.

According to Body and Soul, Scientists at the University of Edinburgh and University of Trieste in Italy (the home of the biggest coffee addicts) researched 3000 people's coffee habits, along with their DNA.

The results found that those with a specific genetic make-up are more likely to be addicted than others. 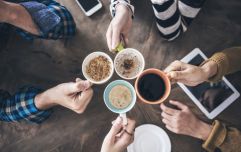 Drinking coffee could reduce your risk of getting cancer, report finds

END_OF_DOCUMENT_TOKEN_TO_BE_REPLACED

Researches found that some people have a gene called PDSS2 which reduces the body's ability to break down caffeine. This means that coffee stays in the system longer which quenches any cravings.

People who do not have that variation of the gene have a metabolism that breaks it down faster, so you don't stay satisfied for as long.

So essentially if you don't have the genetic variation, you are more likely to crave a lot more coffee, so if you just can't shake the addiction and are drinking a coffee as you read this, it's not your fault, blame it on your genetic make-up!

popular
Women and girls struggling with access to period products during #Covid-19, research shows
Paul Mescal wore O'Neill's shorts while carrying cans of pink gin so I bought O'Neill's shorts and cans of pink gin
This amazing hanging egg chair is coming into Aldi next week and go, go go (but safely)!
"What a gent": Matt Damon signs Irish artist's drawing in aid of Pieta House
Her Quarantine Quiz Week 9: Iconic Irish music videos
5 reasons why we need more videos of Doireann Garrihy's new puppy immediately
After days of silence, Scott and Sofia finally comment on the break up rumours
You may also like
2 months ago
Gin, coffee, cocktail competitions and more - get your food and drink on at Dublin Drinks Mixer
3 months ago
WIN a hoodie hamper from Gym+Coffee to spruce up your spring workout
3 months ago
Drinking coffee can help ease pain in some cases, according to research
3 months ago
Here is what really happens to your body when you drink coffee
5 months ago
Bad news coffee addicts: there's probably a load of bacteria brewing inside your machine
6 months ago
Apparently, starting your day with a cup of coffee isn't the best idea and we're listening
Next Page