Molly Malone developed a lump in her breast and no one noticed.

Earlier this month, a small bronze-like lump was created and placed on one of Molly's breasts at her statue just off Dublin's Grafton Street.

Tourists and visitors continued to touch the statue's breasts and take photos with them as they have for decades - without noticing the lump. 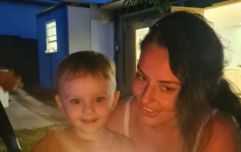 END_OF_DOCUMENT_TOKEN_TO_BE_REPLACED

The Marie Keating Foundation launched their initiative this week as part of their 'Take Notice' campaign encouraging people to discuss breast health and to get checked.

As one of Ireland's most Instagrammed and instantly recognisable monuments, the charity wanted to see whether the hoards of tourists queuing to touch Molly's chest would even notice the small lump there.

This video shows that, for the most part, they didn't.

The clip shows multiple tourists touching Molly's breasts as they pose for photos with one of the city's most iconic statues.

Each of the tourists interviewed afterwards states that they didn't notice anything out of the ordinary when they touched the famous breasts.

Also speaking in the video is breast cancer survivor Yvonne Joye, who says that it's almost too easy to ignore something that's wrong.

"I was terrified I was going to die," she says. "Just feel your breast, just be aware of your body. Don't sacrifice your life." END_OF_DOCUMENT_TOKEN_TO_BE_REPLACED

CEO of the Marie Keating Foundation and breast cancer survivor, Liz Yeates, says that early detection is key and that it does save lives.

“Being breast aware is so crucial to give women the best chance of getting advice and treatment as soon as they may need it," she says.

"This ‘Take Notice’ campaign hopes to bring this to the forefront of the public’s mind and encourage women to be more breast aware by using the most famous pair of breasts in Ireland.

"If a lump on Molly Malone’s breast can go unnoticed then it reinforces just how important it is that women take notice and make self-checking part of their every day routine. Know your ‘normal’ so you can act immediately if you notice any changes."

Breast cancer is the most common cancer in women in Ireland.

Every year more than 3,500 cases are diagnosed, with one in 10 women being diagnosed with breast cancer in their lifetime.