Twins born to a gay couple have two different biological dads after both men were able to successfully fertilise an embryo.

Simon and Graeme Berney Edwards travelled to Canada from London to avail of an advanced IVF treatment that allowed them to fertilise an embryo each.

These embryos were then implanted in surrogate Meg Stone's womb. Nine months later, she gave birth to Calder and Alexandra. 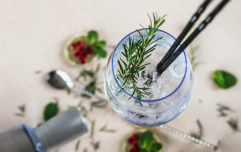 Drinking a G&T can speed up your metabolism, according to research

END_OF_DOCUMENT_TOKEN_TO_BE_REPLACED

The babies, despite being born at the same time, are technically half-siblings because they both have different fathers.

Mail Online reports that both dads are grateful to Meg for helping them achieve their "dream."

"It really is amazing that Graeme and I have been able to father one of our twins each," said Simon.

"Meg did an amazing job - and it meant that she was actually pregnant by two men at the same time. It's thanks to the wonder of IVF that we have been able to achieve our dream."

The 43-year-old explained that even though Calder and Alexandra are half siblings, they are still classed as twins because they were born from the same womb at the same time.

The couple said that they couldn't decide who they wanted to be the biological father of their twins and were surprised when a doctor outside of the UK said that it could be both of them.

"When we spoke to the doctor at the clinic he stunned us with his reply," said Simon.

"They said that we could have half the embryos fertilised with my sperm and then half with Graeme's sperm."

The twins recently celebrated their first birthday back home in the UK.

Meg, their "tummy mummy" flew over to visit too.

Girls With Goals || Her · Ep.160: The Beauty Of Coaching - Hayley Harrison joins us from Sport Ireland
popular
More footage of Tristan Thompson cheating on Khloe has emerged
Amy Schumer reveals that her husband Chris Fischer has autism spectrum disorder
Someone has ranked the penis size of men from all over the world
Woman gives birth to nine babies
Here's what happens on every day of your menstrual cycle (roughly)
Kate Middleton has addressed the rumours that she's pregnant with her fourth child
15-year-old boy charged with murder of woman in Dublin
You may also like
12 hours ago
Woman gives birth to nine babies
1 day ago
Pregnant teachers and SNAs will continue to work from home for rest of school term
2 weeks ago
Maternity hospitals can now begin to ease visitor restrictions says HSE director
2 weeks ago
Man charged with murder of 24-year-old mother Jennifer Poole
3 weeks ago
Queer Eye's Tan France and his husband are expecting their first baby via surrogate
1 month ago
“Say yes to autism acceptance” SuperValu & AsIAm launch new campaign
Next Page