This woman miscarried at 18 weeks over her severe acne

A woman has opened up about how severe adult acne has affected her life.

Bar a few occasional spots, Steph Klassen from Manitoba in Canada never suffered with problem skin as a teenager and only encountered acne for the first time when she fell pregnant at the age of 25.

She developed cystic acne early in the first few months of her pregnancy which she says caused her to get sepsis, a severe infection spread by her blood.

Steph was admitted to intensive care at 18 weeks of pregnancy but after a few days, she lost the baby.

She managed to beat that initial breakout but now, at the age of 29, the mum-of-two is suffering from another severe bout.

"Some days I feel like a monster," she told the Daily Mail.

"The cysts were so deep they were hitting the nerve endings in my face.

"The feeling was like a million lightening bolts shooting all across my face. I would actually twitch involuntarily.

"I couldn't wash my face or touch it. Sometimes I felt so helpless I'd just sit and cry."

As well as causing her to feel ashamed when leaving the house, the skin condition means Steph's kids, who are 11 and three, have to be gentle with her.

"It's been hard to literally coil back in fear as my three-year-old approaches me," she said. 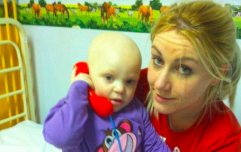 END_OF_DOCUMENT_TOKEN_TO_BE_REPLACED

"It's heartbreaking. He doesn't really understand. But he will come up to me and pat my arm and tell me I'll be all better soon."

Steph is currently taking acne medication Accutane to try and beat her acne, as well as hormone-balancing capsules and cream, iodine drops, essential oils, and a turmeric supplement.

She has taken to Instagram to share searingly honest updates about how her treatment is going and how her acne is affecting her.

"I find that each day it gets harder to care about the feelings of those around me because I'm fighting for my damn life," she wrote wrote in a post last night.

"I'm sorry I'm not a positive ray of sunshine all the time — or even at least a couple times a week... Thank you for loving me anyway."

You can keep up with her story here.

Girls With Goals || Her · Ep.161: Feeling Peachy - Sharon Keegan of Peachylean on being an absolute BOSS!
popular
Aldi is selling a 2in1 grill and fire pit just in time for summer
Cork school may need to close due to "serious" Covid outbreak
Chris Watts in protective custody in prison over "danger" of other inmates
Suzanne Jackson says she will "split time" between Portugal and Ireland
Netflix announce two more sequels to 365 Days
Doireann Garrihy confirms new 2FM breakfast show and start date
Why is the weather app always so wrong?
You may also like
3 days ago
Family of 9-year-old killed by lightning donate his organs to save three other kids
3 days ago
Fantastic Beasts star Kevin Guthrie jailed for three years following sexual assault
5 days ago
Man and woman die in house fire in Co Roscommon
1 week ago
11-year-old schoolgirl dies following road traffic collision in Co Kerry
1 week ago
Seven dead following shooting at birthday party in US
1 week ago
15-year-old boy charged with murder of woman in Dublin
Next Page