22 rage-inducing comments that women have received in the workplace

A day to celebrate everything there is about being a woman but also a day that reminds us of the glaring imbalance between men and women in the workplace.

The gender pay gap is an issue that we're all still fighting against, see here and here for more information on that, and there's no denying that women are subjected to harassment in the workplace on a daily basis.

END_OF_DOCUMENT_TOKEN_TO_BE_REPLACED

If you're not aware of this, or simply don't believe it's true, take a look at the below infographic, based on the results of a recent survey conducted by software company, Jobbio.

Over 150 women, based in the UK and Ireland, were asked to submit some of the comments they have received in the workplace and the results really are shocking.

The infographic displayed below includes 22 infuriating remarks that have been made to women in the workplace.

This is likely to make you very angry but hopefully, it will also encourage us to stand together and unite in the continued fight for equality. 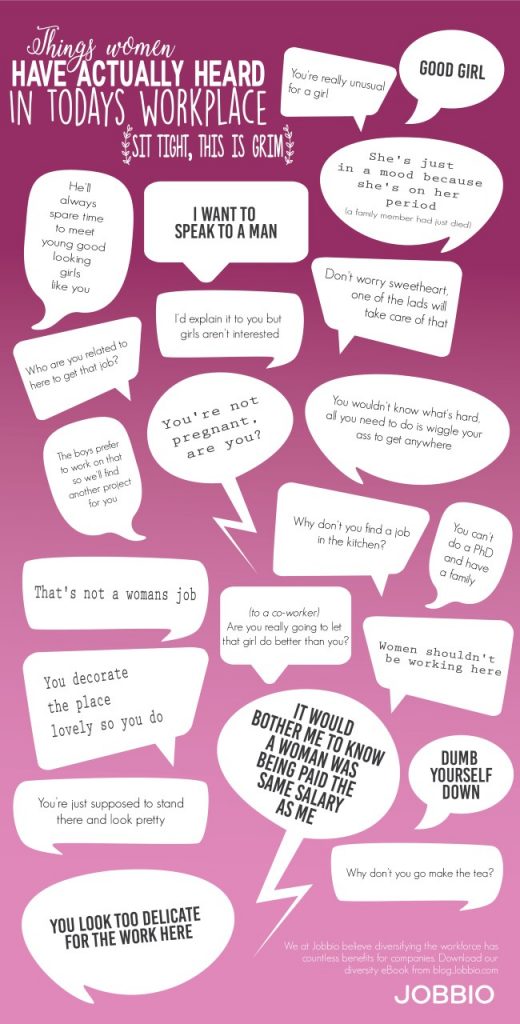 popular
Late Late Show viewers are not happy with Ryan's questions for Billy Connolly
10 items from Zara for the perfect autumn capsule wardrobe
15 brilliant stocking fillers we are picking up from Penneys before they sell out
You fans are convinced Joe Goldberg is secretly Gossip Girl
9 of the best horror movies on Netflix this Halloween
Goodbye, clutter: This 30-day challenge will help organise your entire life in one month
Dublin bridal shop donates their dresses to Barnardos every year
You may also like
2 days ago
Former detective chief says Brian Laundrie discovery is "strange"
2 days ago
Alec Baldwin 'heartbroken' after accidental death of Halyna Hutchins
2 days ago
Young woman suffers serious eye injury after being struck with a firework in Eyre Square
2 days ago
Prop gun discharged by Alec Baldwin kills crew member on set
3 days ago
Three month sentence of Garda for domestic violence is "appalling" says Women's Council
3 days ago
At least seven bodies have been found in search for Brian Laundrie
Next Page