Brought to you by Rockshore.

Think of an island paradise and you'd probably consider the likes of white sand, palm trees, and clear turquoise waters.

However, away from tropical settings, on home-soil we have some INCREDIBLE island spots that we reckon trump any far-flung destination. So incredible in fact, that Rockshore are sending a lucky winner, plus 11 of their friends away to a stunning destination off the coast of Mayo. (More on that below...)

So, with that in mind, we've rounded-up five of our favourite island spots along our country's stunning coast. All are just about perfect for a getaway with the gals too.

So round-up your comrades, pack up the car, and hit the road...

With sailings leaving daily and taking just 10 minutes from Baltimore, Sherkin Island is really handy and accessible. It has a population of around 100, measures 5km X 3km in size, and is absolutely stunning too. 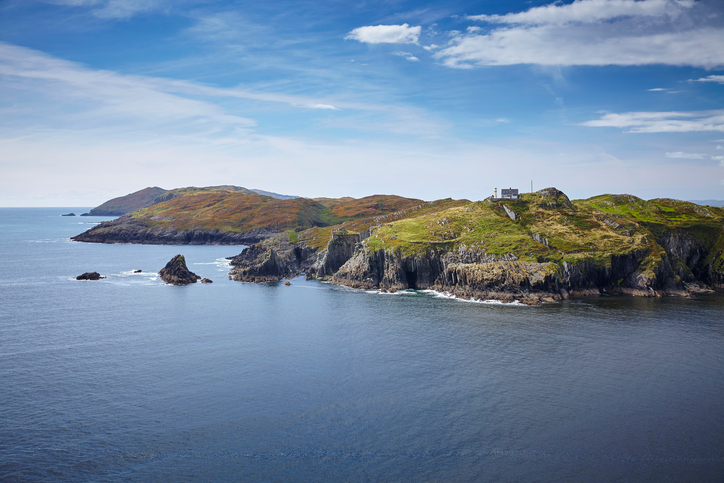 Pretty landmarks include the ruins of a 15th century Franciscan abbey as well as an automated 19th-century lighthouse.

Although this is a good year-round bet, the island really hots up during the summer. The Sherkin Regatta, for example, is held every year in July and this year took place on July 1.

END_OF_DOCUMENT_TOKEN_TO_BE_REPLACED

Sherkin's three sandy beaches are totally worth a visit. Walking along the shore you may see seals, otters, schools of dolphins or the porpoises which gave the island its name. A number of artists live on the island and Sherkin is unique in running a Fine Arts Degree Course.

These two islands off the coast of Donegal are both perfect if you're looking for a true Irish experience. 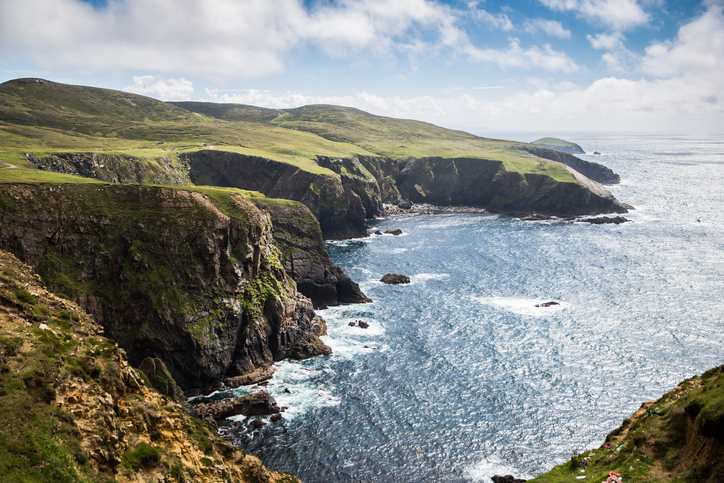 END_OF_DOCUMENT_TOKEN_TO_BE_REPLACED

Both islands are in the Gaeltacht and so Irish is the main language spoken there (though everyone can, of course, speak English to those of you whose Irish, like ours, whose Irish is a little rusty since the auld LC).

Arranmore has loads of beaches, perfect for a stroll or seaside picnic. There are electric bikes for rent on the island so you can cycle around and soak everything in (with minimal effort - yay!).

Every year, Arranmore plays host to Swell Festival, a festival of music and arts. This year's festival is taking place the weekend after next from the 27th-29th of July.

While Arranmore provides the sandy beaches, Tory Island boasts several culture and historical spots of note to visit on your getaway.

Balor's Fort is an impressive and picturesque peninsula that you can only get to by crossing an isthmus that's surrounded by 90-metre high cliffs. It is named after King Balor of the Evil Eye, who was a cyclops and the ruler of Tory Island.

The island is rich in history and folklore and one of the stops you should really make on your visit is at the Wishing Stone.

Legend has it that this flat-topped rock, lying on Balor's fort, can grant a wish to those foolhardy enough to step onto it. For those of us not quite willing to take the full risk, a wish will also be granted if you manage to throw three stones onto the rock.

The ferry to Tory Island does not allow cars but the island is small enough that you can walk around no problem.

This beautiful little island is the largest of all of the islands lying in Clew Bay, Co. Mayo (365 islands - one for every day of the year). A boat to the island takes about 25 minutes and leaves two or three times a day.

It has its own blue flag beach so would make a perfect sunny day getaway. If you're looking to escape from the crowds and stress of everyday life, sign up to one of the yoga or mindfulness retreats.

Several events take place on the island over the summer - from sports days to plenty of nights of ceoil agus craic at the pub, we can guarantee that you won't have a day out like this anywhere else. 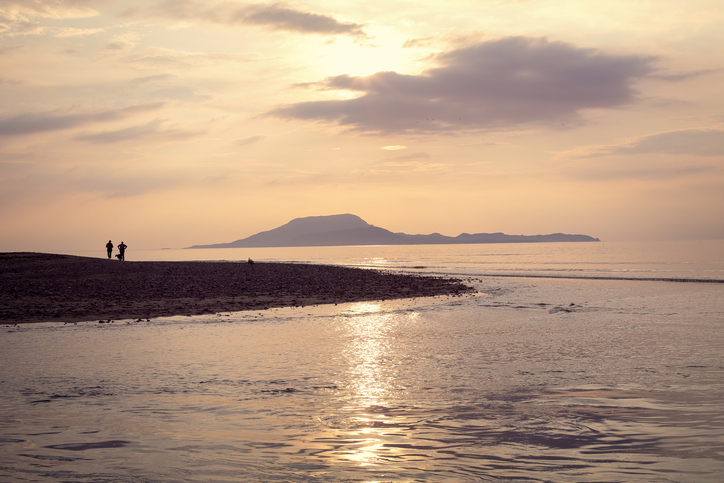 And for those culture-heads out there, Clare Island is the site of the Pirate Queen Granuaile's castle. The island was the stronghold of the famous Grace O'Malley and her castle remains an iconic landmark. It was converted into a police barracks in the early 1800s but still maintains its original structure.

We know what you're thinking. Valentia. This sounds lovely and Spanish and warm.

Unfortunately, the temperature here is no warmer than the rest of Kerry, and the culture is as Irish as you can get. That doesn't mean we don't love it though.

The culture may be Irish but this little island's history is ancient and far-reaching.

The first trans-Atlantic telegraph cable ever stretched between Valentia Island and Newfoundland.

Going back even further, there is a tetrapod trail marked into the island rocks. These are fossilised footprints of four-legged amphibians that date back to over 350 million years ago. You know. No big deal.

But honestly, this island is a historical landmark all of its own. Unmissable.

Valentia Island is also a part of the Wild Atlantic Way and has absolutely stunning views along its coastline. 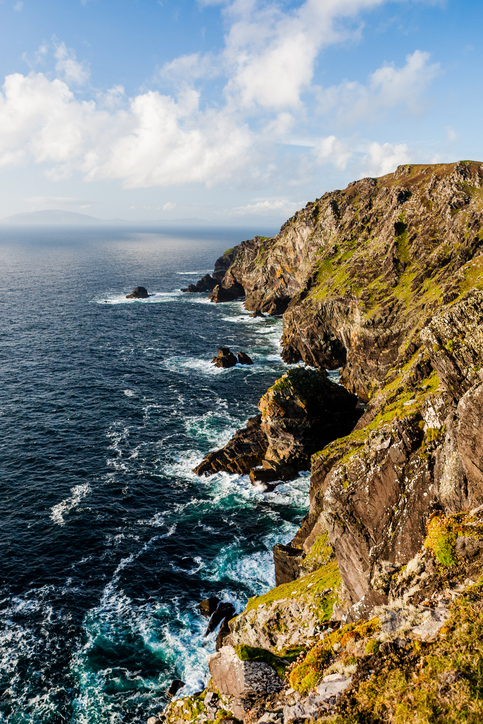 We suggest you pop on a Kerry ferry pronto.

This pair of islands lie off the coast of Wexford and have to be two of the most beautiful islands in around Ireland.

Now, we do have to give you a warning - this place might not be the best if you have a fear of birds.

We mean proper birds, like gannets and puffins, not steal-your-crumbs birds like pigeons. You won't be swarmed as if you're eating a sandwich by Stephen's Green lake; the birds will be at a distance but there are a LOT of them. 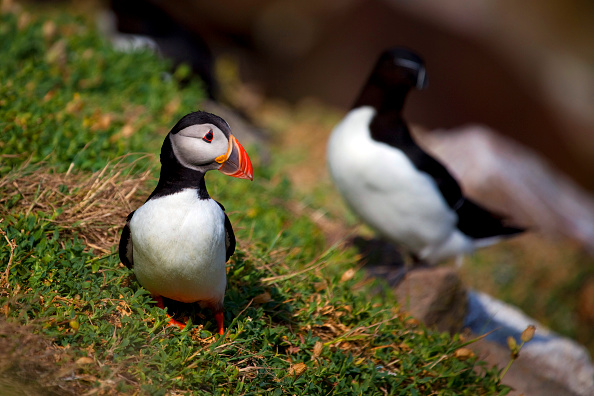 The largest of the islands, Great Saltee, is the most famous bird sanctuary in Ireland and July is the perfect time to go if you want to see a wide variety of birds.

The islands are owned by the Neale family who aim at preserving the wildlife and scenery of the islands.

Great Saltee is open to the public during the day from eleven to four, so you can catch a ferry over to it and explore. This trip is pure beauty.

But to be in with a chance of getting away to your own private island with Rockshore (and 11 friends), simply enter here!

Brought to you by Rockshore.

popular
Taxi driver who dropped missing woman Bernadette Connolly off comes forward
Ashling Murphy's funeral to take place today
The massive Penneys in Dundrum is relocating - and getting even bigger
Concerts and pub restrictions are expected to be lifted this week
Gardaí are planning to make an arrest in Ashling Murphy murder case
Fans convinced Love Island's Chloe inspired new Kanye track
Una Healy "having fun" dating Garda love interest
You may also like
1 day ago
Giant asteroid "bigger than any building" to pass Earth on Tuesday
1 day ago
Calls for all of Government to respond to gender-based violence in wake of Ashling's murder
4 days ago
Kin star Clare Dunne listed as European Shooting Star
1 week ago
Up to 150,000 Covid cases may not have been counted over the past month
1 week ago
Micheál Martin does not anticipate "major changes" to restrictions
2 weeks ago
Teenager drowns off the coast of Arranmore Island, Donegal
Next Page