86-Year-Old Woman Publishes Her First Novel And It's A Steamy One!

The great grandmother, spent five years penning the novel, which was published in February under the pseudonym Georgie Marie.

No Good-Bye tells the story of a woman who listens to radio and is turned on by the voice of the man that she hears. 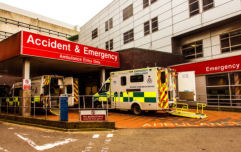 Doctors perform c-section on a woman who wasn't actually pregnant

END_OF_DOCUMENT_TOKEN_TO_BE_REPLACED

"And that voice on the radio, oh, he had a magic voice! And it just turned her on!", said Georgia in an interview with KUTV.

It took Georgia five months to write the novel

Georgia's daughter Bobbie Posey, is proud of her mother's accomplishment but admits to being shocked at some of the content. "Sometimes I'm like, mother, how could you do that? How can you write that?" said Bobbie.

Utah woman Georgia has said that the book is fiction but her daughter has other opinions saying that "a lot if it is real life. I mean, we know who she is talking about".

The book is 176 pages long and can be purchased on Amazon.com or read via Kindle. We think Georgia is a bit of a legend...

popular
Ant and Dec open up on their real feelings about the 2022 I'm A Celeb cast
Jill Scott admits she gave Owen Warner extra food at meal time
Fundraiser set up for boy attacked by pit bull in Wexford
Kylie Jenner shuts down claims she used her children to cover up for Balenciaga
It looks like Harry Styles and Kendall Jenner could be getting close again
Fair City star Jenny Dixon shares her twins' gender in sweet video
The trailer for Channel 4's Vardy V Rooney: A Courtroom Drama has dropped
You may also like
7 months ago
Woman and two children targeted by group of men in daylight as Gardai appeal issued
3 years ago
Body found in Carlingford Lough following search for missing woman
4 years ago
This 104-year-old drinks Diet Coke everyday and believes it's her secret to a long life
4 years ago
There's one food group you should always avoid before bed
4 years ago
Woman filmed drying her knickers with overhead vent on an airplane
4 years ago
Fans are freaking out over Nathan Carter's latest snap with mystery woman
Next Page