90-Year-Old Man Arrested and Fined for Feeding the Homeless

For most, the biggest crime in the case of homelessness is the failure on behalf of governments to provide more help for those who find themselves so vulnerable.

In Fort Lauderdale, Florida, however, being one of the Good Samaritans who step up to help can land you in police custody.

Recent regulations passed in the city have cracked down on the help provided to homeless people by charitable citizens. Ostensibly the rules are to "protect the homeless by directing them to stabler services", but in reality it has made it near impossible for help to be offered.

According to local reports, the new rules require any group distributing food indoors to stay 500 feet from other sites. Outdoor sites now have to operate 500 feet from any residential business, seek the permission of property owners, and provide portable toilets.

The stringent rules have already forced several charitable groups out of action and the conditions are being heavily enforced, as witnessed by 90-year-old Arnold Abbott on Sunday last.

Speaking to KHON, Abbott said: "One of police officers came over and said, 'Drop that plate right now,' as if I was carrying a weapon." "It's man's inhumanity to man." 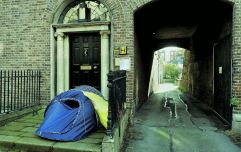 6 ways you can help the homeless in Ireland this Christmas

END_OF_DOCUMENT_TOKEN_TO_BE_REPLACED

He and two local ministers have been charged with offences that could result in two months of a jail sentence and a $500 fine.

Now, Arnold says he plans to sue the city. "I’m going to have to go to court again and sue the city of Fort Lauderdale - a beautiful city" he said. "These are the poorest of the poor, they have nothing, they don't have a roof over their heads. How do you turn them away?".

popular
Will Smith admits to 'failing miserably' in 21-year marriage to Jada Pinkett Smith
Someone has ranked the penis size of men from all over the world
Here's what happens on every day of your menstrual cycle (roughly)
QUIZ: Can you guess the TV series from the intro lyrics?
QUIZ: How well do you remember the 2005 movie Pride & Prejudice
Glee Star Naya Rivera Faces Backlash After Making ‘Race’ Joke
Sweet Magnolias author Sherryl Woods shares hopes for season two of the Netflix series
You may also like
5 months ago
Eoghan Murphy "saddened" by serious injuries to homeless man, removes campaign posters from scene
1 year ago
The number of people homeless in Ireland has passed 10,000 for the first time
1 year ago
This mini marathon will give you a workout AND there's goodies at the end
1 year ago
Homeless mum-of-seven Margaret Cash is offered three-bedroom home in Dublin
1 year ago
Number of homeless children in Ireland has trebled in three years
2 years ago
The amazing initiative that's making a real difference to Ireland's homeless women
Next Page