First they came with faux-skin cases, and we said nothing...

Technology is constantly evolving, adapting, and improving, and it's often difficult to keep apace with the latest developments.

But sometimes you're better off not keeping up...

Especially when Marc Teyssier at Telecom Paris in France and his colleagues have devised an artificial skin for interactive devices that responds to your touch.

Your touch or... tickle, pinch and squeeze.

END_OF_DOCUMENT_TOKEN_TO_BE_REPLACED

You'd be forgiven for thinking this is actually a leaked plot from the next series of Black Mirror, but alas, we regret to tell you this is real.

But thankfully, it's not on sale yet and will instead be presented at the ACM Symposium on User Interface Software and Technology in New Orleans.

The artificial skin is made of three layers, consisting of a layer of stretchable copper wire sandwiched between two layers of silicone. Pressure on the skin changes the electric charge of the system.

"When we interact with others, we use skin as interfaces," explained designer Marc Teyssier. 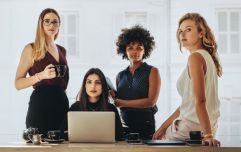 END_OF_DOCUMENT_TOKEN_TO_BE_REPLACED

"However the objects of mediated communication — such as the smartphone — still has a cold interface that doesn't allow natural interaction and input. In this project, I wanted to make available the perfect human interface that is the skin for existing devices."

popular
Fleetwood Mac's Christine McVie has died aged 79
Hollyoaks star Jorgie Porter has welcomed a baby boy
Zendaya and Tom Holland are being flooded with rumours they're engaged
Fundraiser set up for boy attacked by pit bull in Wexford
Ant and Dec open up on their real feelings about the 2022 I'm A Celeb cast
It looks like Harry Styles and Kendall Jenner could be getting close again
The trailer for Channel 4's Vardy V Rooney: A Courtroom Drama has dropped
You may also like
3 months ago
WhatsApp introduces way to choose who can and can't see you're online
8 months ago
Here's why you need to change your passwords right now
11 months ago
You can now get £150,000 if you let a robot use your face and voice
1 year ago
WhatsApp launches privacy update today after Irish ruling
1 year ago
WhatsApp to stop working on over 50 phone models today
1 year ago
Facebook looks set to change its name as part of rebrand
Next Page