The Reserve Bank of Australia (RBA) has had a shocker lads. Honestly.

They rolled out a new $50 banknote in October last year that not only contains fancy polymer technology which prevents counterfeiting but also features Australia's first female member of parliament, Edith Cowan.

The good news is, er, the typo only appears on *checks notes* 46 million bills. 46 million. It might just be easier to change the Australian English dictionary's correct spelling of responsibility at this point. That's too many notes to recall. That's just too many I'm afraid. Easier to just permanently rejig the word responsibility and alter *checks notes* well over 100 years of speaking the English language there, I reckon.

After a hot tip from the @triplemmelb family, we’ve found the spelling mistake on the new $50 note! #BreakingNews 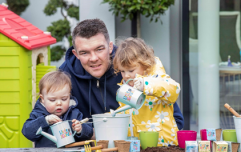 END_OF_DOCUMENT_TOKEN_TO_BE_REPLACED

The typo occurs in the 'micro-print' on the note that is a transcript of Cowan's first speech to parliament. It reads: “It is a great responsibilty [sic] to be the only woman here, and I want to emphasise the necessity which exists for other women being here."

According to the RBA, the $50 note is the most widely circulated bill in the country and on Thursday a spokesperson confirmed that they were aware of the error, which "will be corrected on the next print run".

Personally, I think this needs to go right to the top. Only the Australian prime minister's involvement will do.

popular
PERSONALITY QUIZ: Which Normal People character are you?
From Miami to Mallow: The Irish Instagram star who's renovating an old post office during lockdown
The Skin Nerd on updating your lockdown skincare routine, and picking spots - if you HAVE to
5 ways you can help the George Floyd protesters and Black Lives Matter movement
PIC: People are gushing over this fake image of Ireland
After days of silence, Scott and Sofia finally comment on the break up rumours
I tinted my eyebrows with fake tan - and other TikTok beauty hacks you should know
You may also like
2 months ago
Ronan and Storm Keating have welcomed their second baby – and her name is the cutest
2 months ago
ISPCC/CHILDLINE and RTÉ 2FM team up for fundraising digital music show
2 months ago
#SocialDistancing: Unsurprisingly, we can expect a coronavirus baby boom in December
2 months ago
Early research suggests the coronavirus might be less harmful to children and pregnant women
3 months ago
We have had a sneak peek at Sostrene Grene's Easter collection and mark your calendars now
3 months ago
Making a Murderer lawyers to host a new true crime podcast about wrongful convictions
Next Page