Banksy produced another profound panting back in May.

In a world-record auction, Banksy's Covid-19 painting has just been sold for £16.8 million, including a buyer's premium of £1.8 million. In line with this inherently charitable act, the bulk of this some - "more than £16m" - would go directly to the Southampton Hospitals and other charities.

The painting entitled 'Game Changer' first appeared in Southampton University Hospital last year. In typically Banksy fashion, it appeared seemingly out of nowhere and instantly caused a stir. It depicts a young boy playing with superhero dolls; his basket is filled with both Batman and Spider-Man toys, but the one he holds aloft is a superhero nurse.

The image conveys the profound message that the real superheroes are the everyday ones: doctors, nurses, midwives and all healthcare workers in general. The touching black and white image immediately resonated with everyone. 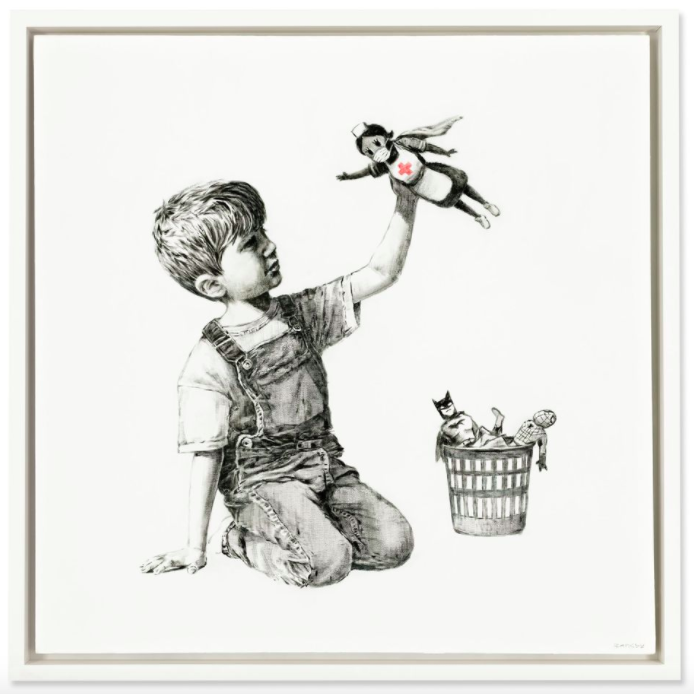 END_OF_DOCUMENT_TOKEN_TO_BE_REPLACED

When it appeared, the artwork accompanied a short yet sincere note from the anonymous artist: "Thanks for all you’re doing. I hope this brightens the place up a bit, even if it’s only black and white."

Banksy's repertoire is full of political commentary and biting satire. One of his most recent came in 2019, cleverly dubbed Devolved Parliament, as it showed the House of Common's full of chimpanzees. It was a record auction for the Banksy back then which made an equally powerful statement. He had this to say following its sale:

END_OF_DOCUMENT_TOKEN_TO_BE_REPLACED

Although 'Game Changer' may have gone to the highest bidder, a replica canvas will hang in the very same spot it was found in at Southampton University Hospital. David French, the interim chief executive at the hospital said "this incredible gift will be invaluable in helping us to focus on promoting and protecting the welfare of our staff as they heal and recover from the last year".

He went on to say that "as a charitable gift, it ensures our staff have a say in how money is spent to benefit them, our patients and our community and is a fantastic way to thank and reward them for the sacrifices they’ve made".