Generally, beetles aren't at the top of our list of relationship goals.

Generally, beetles don't tend to be in relationships at all and yet here we are - wishing we had someone who treats us with as much respect and love and affection as this beetle treats her boyfriend. 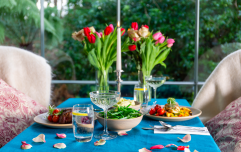 END_OF_DOCUMENT_TOKEN_TO_BE_REPLACED

Sure look, what can you do?

When you hit rock bottom the only way to go is up.

The beetle in question is called Sally and she's in a very loving relationship with Spike the stag beetle.

It was both emotional and impressive. 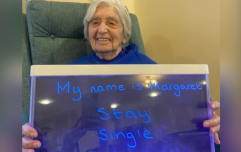 END_OF_DOCUMENT_TOKEN_TO_BE_REPLACED

There she goes there now - on her way to make someone's day.

So thoughtful. So kind.

When the video was originally posted, many people thought the beetle was Spike because, believe it or not, Spike actually has quite a following on Twitter.

He may be a beetle but he draws things, walks around the place, and essentially does lots of other things that pets and humans can do.

For those saying he’s a good boy: this is a good girl! Her name is Sally. She’s Spike’s tiny lady friend.

Spike may be a lot bigger than Sally but that doesn't mean that their love hasn't been able to flourish.

Gonna sweep you off all six feet ❤️ pic.twitter.com/uNlqRZS3gA

Spike can be a pinchy guy, but he's always very delicate around miss Sally. She gets lots of happy antennae wiggles. pic.twitter.com/SajQhiVJze

popular
Meabh Feerick passes away after sharing that she felt "let down" by Irish healthcare system
Stacey Solomon mortified after walking around shop in see through leggings
Vicky Pattison thanks fans for support after doctors find ovarian cyst
Liveline listeners call for RTÉ's new property show to be scrapped
Father and daughter stabbed to death in London
Someone has ranked the penis size of men from all over the world
14-year-old boy charged with murder of 12-year-old Ava White
You may also like
9 months ago
Five classic feel-good romantic flicks to stick on this weekend
9 months ago
60 per cent of Irish people open to sharing virtual meal for Valentine’s Day
9 months ago
Domino's rolls out new 'Absolute Banger' just in time for Valentine's
9 months ago
Valentine's Day gift guide: 10 gorgeous gifts we would LOVE to unwrap
9 months ago
You can now get Love Hearts Krispy Kreme donuts just in time for Valentine's Day
10 months ago
A café in Sligo has created a breakfast in bed treat box for two for Valentine's Day
Next Page