Before Making A Murderer, There Was The Jinx

True crime is having a moment, and before Making A Murderer gripped the planet, there was a HBO docu-series called The Jinx.

The Jinx was a documentary that centred around a man named Robert Durst, who was accused of multiple murders over several decades including that of his first wife Kathie and a neighbour, Morris Black.

The series examined the circumstantial evidence linking Durst to the murder of Susan Berman. 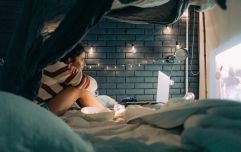 END_OF_DOCUMENT_TOKEN_TO_BE_REPLACED

She may have had information about the disappearance of Kathie Durst and could have approached the police, so self-preservation was Durst's key motive.

Durst was arrested for this murder in 2015 after the final episode aired.

There's now been an update in the case, according to Mashable. Durst has pleaded guilty to a weapons charge in the State of Louisiana, which means he may be extradited to California to face trial for the murder of Berman.

Durst's attorney made a statement after the hearing:

END_OF_DOCUMENT_TOKEN_TO_BE_REPLACED

"This agreement has a lot of moving parts and a lot of jurisdictions. What we're doing and have been trying to do from the start is get Bob Durst to Los Angeles. Bob Durst did not kill Susan Berman, does not know who did, and wants to prove it."

popular
Irish girls name was the most used Irish name in the United States last year
Love Island fans are scratching their heads after finding Tasha's maternity photoshoot
Buying fake designer goods abroad this summer can have some serious consequences
Davide locks lips as Ekin-Su hits Jay with a LOT of drama in tonight's Love Island
Outrage as woman says doctor told her to "be quiet" during labour
Two dumped islanders have confessed their feelings for each other since leaving the villa
Love Island’s Afia explains why Gemma’s dad has not been mentioned on show
You may also like
17 hours ago
Netflix is reportedly working on a Stranger Things musical
2 days ago
Selling Sunset's Maya Vander confirms she's leaving the show
2 days ago
Netflix CEO confirms adverts are coming to the service
2 days ago
Selling Sunset star quits show as it's renewed for two more seasons
6 days ago
WATCH: Netflix's latest true crime Girl In The Picture looks seriously intriguing
1 week ago
WATCH: The first trailer for Blonde, the first adults-only movie made by Netflix
Next Page