Black Friday is only a week away, but like every other year, the deals often begin a lot earlier.

The good deals have been pouring in, with high street brands offering discounts anywhere they can. 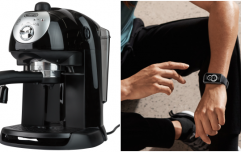 END_OF_DOCUMENT_TOKEN_TO_BE_REPLACED

The hairdressing chain is a favourite among a lot of us, not only do we love a blowdry here, but they offer some of the best gadgets on the market.

From Friday the 19th, they're offering €30 off some of the most popular heated styling tools like GHD products and the L’Oréal Steampod, available in all Peter Mark and Style Club salons.

One for the kiddies, Tayto Park is also hopping on the Black Friday deals, offering 20% off All-Access Tickets, with tickets now reduced from €35 to €28. This deal is available until Monday 29th of November.

Currys PC World always gives us a good deal when it comes to our electronics, with discounts on their entertainment tech and home appliances. The Black Friday deals here could save you up to as much as €470.

Irish activewear brand Gym + Coffee has some deals that we'll all want to be a part of, with up to 50% off windbreakers, t-shirts, joggers and everything in between.

Trusty aul Dunnes Stores has deals on technology, accessories and appliances, with discounts on things like wireless Bluetooth speakers, toastie makers and smartwatches.

A post shared by SOSU By Suzanne Jackson (@sosu_bysuzannejackson)

The Skerries influencer has been a household name for years, and her Black Friday deals with 30% off on tan, skincare and makeup are very much welcomed.

Eason does Black Friday like no other, with deals on some of this year's biggest releases like It's Marty by Marty Morrissey and A State of Emergency by Richard Chambers.

Woodies is offering discounts on almost everything in their store, from garden furniture to decorating to lighting, just be sure to grab it while you can.

The Donegal department store is offering 50% off on selected women's, men's and kids' clothing and footwear, as well as offers on jewellery, Christmas gifts, beauty and homeware.

They do sales we can't even fathom on a normal day, so Therapie Clinic's Black Friday sale is another story. They're offering 75% off their laser hair removal treatments, 25% off products from their skin shops and 3 for 2 on cosmetic injections.

McCabe's is also doing an unbelievable deal this year with nearly 60% off products ranging from skincare to electronics to fragrances.

Boots is claiming to have the biggest Black Friday sale for them yet, with massive savings on MAC, No. 7 and Fitbits.

Vogue William's tan brand Bare By Vogue is offering a 30% discount off of all their products, yes please.

popular
Love Island's Gemma finally tells villa about dad Michael Owen on TV
Parent's Benefit Leave in Ireland is being extended from today - here's what you need to know
Love Island: Danica sets her sights on Andrew as Luca asks Jacques about his relationship with Gemma
10 stunning and affordable outfits that are perfect for a summer wedding
Irish girls name was the most used Irish name in the United States last year
Drama series about Maxine Carr and Ian Huntley is filming in Dublin
Another of Gemma Owen's family could be headed for a reality show
You may also like
7 months ago
Get your wardrobe kitted out for less with these Black Friday deals
7 months ago
5 Black Friday beauty deals too great to miss out on
7 months ago
IKEA goes Green for Black Friday – to encourage 'thoughtful consumption'
7 months ago
10 products we're nabbing in the Glossier Black Friday sale
7 months ago
Some amazing tech deals to watch out for in this year's Black Friday sales
7 months ago
Shop this season’s must-have pieces for less this Black Friday
Next Page