Want to bring your bottle of wine on a lovely bicycle ride? No problemo

Is that not where the water bottle is meant to go?

There is nothing like a good bicycle ride through the countryside to clear your head. When you're pedalling away with the wind in your hair, you're in a world of your own.

However, this cyclist felt that the beautiful countryside cycle needed an extra kick and decided to bring along something for the ride...

I s*it you not, outside hostel in inishbofin pic.twitter.com/yilqQoM6Cn 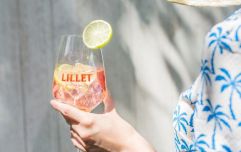 END_OF_DOCUMENT_TOKEN_TO_BE_REPLACED

Twitter user Mary Anderson, with the handle @molltrot spotted this in Inishbofin and couldn't help but take a quick snap to share with her followers.

She wrote: "I s*it you not, outside hostel in Inishbofin."

Now, while it's easy to just assume the cyclist is drinking wine from the Pinot Grigio bottle, there might just be a simple explanation for this like, all the water bottles were gone missing and this was the only one lying around the place.

However, if it looks like wine and is in a wine bottle well, you do the maths. We do not condone this sort of carry on. Never, ever, drink and cycle.

Girls With Goals || Her · Ep.161: Feeling Peachy - Sharon Keegan of Peachylean on being an absolute BOSS!
popular
Women's anger after being told to leave Wetherspoons for wearing "inappropriate" tops
5 best road trips to do in Ireland this summer
The DIY frozen coffee recipe that's so delicious you'll never pay for an iced latte again
Fashion brand Shein accused of trademark infringement
Aisling Bea is reportedly dating a leading Hollywood man
FM104 apologise for "making light" of voicemail from 4-year-old boy with additional needs
Here's all the juicy details about Vogue Williams' new talent show
You may also like
1 day ago
Wine Wand: Apparently this gadget is stopping hangovers
2 weeks ago
Lidl's wine cooler handbags with a secret nozzle are back in store soon
3 weeks ago
Totes bags for your wine exist and we're going to need one ASAP
4 weeks ago
SuperValu is selling three litres of wine in a bag for €28
2 months ago
Winery offering $10,000 a month to drink wine and live rent free in California
6 months ago
Graham Norton launches new fizzy rosé just in time for festive season
Next Page