It would be handy.

If you're a regular public transport user, then you know of the rise in fares over the past number of years. I remember being in school and paying 20c to get home on the bus.

Of course, that was a school child's fare... however it's now €3 or €2.25 with a Leap Card to go just about anywhere in and out of the city centre. 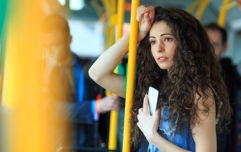 END_OF_DOCUMENT_TOKEN_TO_BE_REPLACED

A Dublin senator has now made the call for fares to be cheaper at the weekend. And while yes, it would be class for a discounted ride into town, it's also to encourage the public to leave their cars at home in order to reduce pollution.

According to FM104, Fine Gael's Catherine Noone says that she would like to see lower fares on the DART, the Luas and Dublin Bus as soon as possible.

"I mean I'm saying we introduce at the weekend a free public transport. Certainly a great starting point would be to reduce it.

"I know if you have a leap card there are savings but a similar journey in London would be £1.50."

popular
How to turn 20 days of annual leave into 50 days off
Richard Madeley under fire for comments about Kate Middleton's waist
Man arrested after woman raped on train as passengers filmed it
WATCH: The first trailer for Ozark Season 4 just dropped
70-year-old woman reportedly becomes first-time mum after welcoming baby boy
Police search for missing 4-year-old girl in Australian outback
Police launch investigation after woman "spiked with needle" in UK nightclub
You may also like
3 months ago
Dublin Bus launches investigation after woman says she was "slut shamed" by driver
3 years ago
Family-of-three survive falling on tube tracks after ducking under moving train
3 years ago
Transport update: A bit of good news if you're planning on heading out tomorrow
3 years ago
Dublin Bus says it's 'one of the top performers'... Twitter greatly disagrees
3 years ago
The simple way Paris is tackling sexual harassment on public transport
3 years ago
Public service announcement: Dublin Bus and Luas fares are going up (again)
Next Page